Georgia has agreed to issue up to $2.1 billion in bonds on behalf of Emory University. The money is to help fund new construction and refinance existing debt. 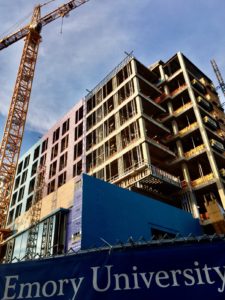 Emory University’s construction of health care facilities, such as this one along Clifton Road a few years ago, has been deemed as a benefit to the public and worthy of the state’s help in gaining access to financing at favorable interest rates. Credit: Kelly Jordan

Investors have purchased the first round of bonds, which totaled about $486 million and went to market May 20, records of stock trades show. Emory will pay interest rates of 5 percent or less, with rates decreasing for bonds that are to mature as the bonds are to be paid in full, in 2041, according to terms of the bonds.

Moody’s Investors Service rated the bonds at its second-highest rating: “high quality and are subject to very low credit risk.”

State taxpayers are not on the hook to repay the debt, which is to be issued by the Georgia Private Colleges and Universities Authority.

Other Georgia schools that have benefited from similar bond sales by the authority include Spelman College, Mercer University, Clark Atlanta University, and Savannah College of Art and Design, according to a history of the authority’s transactions.

The premise of these deals is that they benefit both citizens of the state and the private colleges and universities.

The deals begin with the state authority determining that a public good will arise from the project to be built by the private college or university.

Once that decision is reached, the authority recommends to the governor that the state agree to sell bonds. If the governor agrees, the bonds will be tax exempt because they are issued by the state as private activity bonds. The governor’s ruling determines the bonds are tax exempt under provisions of the Internal Revenue Service.

Here’s how a report to Congress, by the Congressional Research Service, describes the benefit for citizens of the state and investors:

Gov. Brian Kemp authorized the bonds to be issued by the state authority in an executive order dated May 11. The authority approved the proposed bond issuance at a public meeting April 16, according to the governor’s executive order. 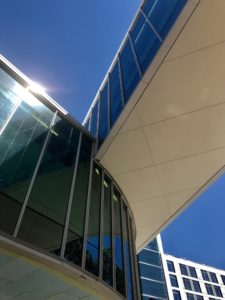 Emory University has expanded its network of health care facilities in ways that warrant a subsidy from the state in the form of help in obtaining reduced borrowing costs for construction, state officials have determined. Credit: Kelly Jordan

The executive order provides this detail about two distinct uses of the proceeds of the bonds:

Moody’s issued a credit rating on May 4 that provided a positive view of Emory’s financial position, and its wherewithal to repay the loan.

The rating did observe financial challenges: Emory is not immune from challenges related to COVID-19 and its potential impact on revenue streams related to investments, student enrollment and health care functions. The rating action observes:

However, Moody’s analysts added that the outlook for Emory’s financial position is stable: