Teams from Dallas and Baltimore took home top honors, but in a sense Emory University and metro Atlanta were the real winners in this weekend’s International Emory Global Health Case Competition. 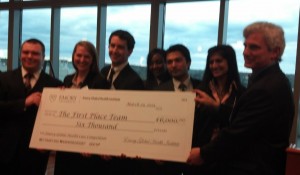 The image is blurred but still illustrates the team from the University of Texas Southwestern Medical Center, which won the International Emory Global Health Case Competition. Dr. David Barash, a chief medical officer for the lead sponsor GE, is on the right. Credit: Emory University

The event drew to Emory’s campus more than 140 top students and scholars from the U.S. and countries including Australia, Canada and Sweden. For these students, Emory was the venue to propose and debate 21st century strategies for the World Health Organization.

These strategies are extremely important. The question about the future of WHO is commanding worldwide attention from leading scientists and health care practitioners.

Back in 2010, WHO launched a comprehensive effort to reform an organization that was founded in 1948 as a specialized agency of the United Nations.

WHO has an impressive history. Past successes include the global eradication of smallpox, in 1980. Significant strides have been made against polio, guinea-worm disease, and leprosy.

But serious questions have arisen about the role of WHO in the modern world order. 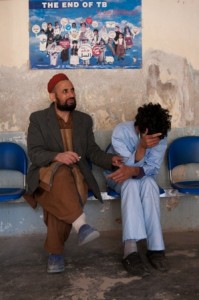 As it continues to work to provide aid in places such as Afghanistan, the World Health Organization is in the midst of reform, which was the topic of a recent competition hosted by Emory University. Credit: Laura Salvinelli via www.behance.net/gallery

WHO’s director general, Dr. Margaret Chan, got the ball rolling on the issue of reform by convening in January 2010 a discussion of future financing of WHO.

According to the WHO website, that conversation quickly expanded:

There’s little reason to suspect that any of the discussions that occurred at Emory over the weekend will make their way onto the agenda of WHO’s 67th World Health Assembly. It’s slated to meet the third week of May in Geneva, Switzerland. WHO continues to provide monthly update of its reform efforts.

But there is strong reason to suspect that those who participated in the International Emory Global Health Case Competition will associate their discussions of global health and wellness with Emory’s campus and their time in metro Atlanta. They will return home with impressions of Emory as a place where cutting-edge thinkers took on one of the world’s major challenges – human health.

“The International Emory Global Health Case Competition has become by far the largest and most recognized academic global health team event in the country,” Dr. Jeffrey Koplan, Emory’s vice president for global health, said in a statement released before the contest. “The competition is an excellent opportunity for talented students from throughout the United States and other nations to apply their knowledge and creativity to solving a real-world global health challenge.”

The teams were charged with developing organizational strategies for WHO in order, “to ensure it successfully meets emerging 21st century health challenges.”

Teams were comprised of undergraduate and graduate students, and professional school students, from a wide array of fields.

The teams got their assignment on March 24. They convened on campus over the weekend and Emory announced the following results late on March 29:

GE remained in the role of signature sponsor of this year’s event, as it has since 2011. Other sponsors include Dayna International, John Snow, Inc., the Pendleton Group, and the Red Rock Brewing Co., according to Emory’s statement.