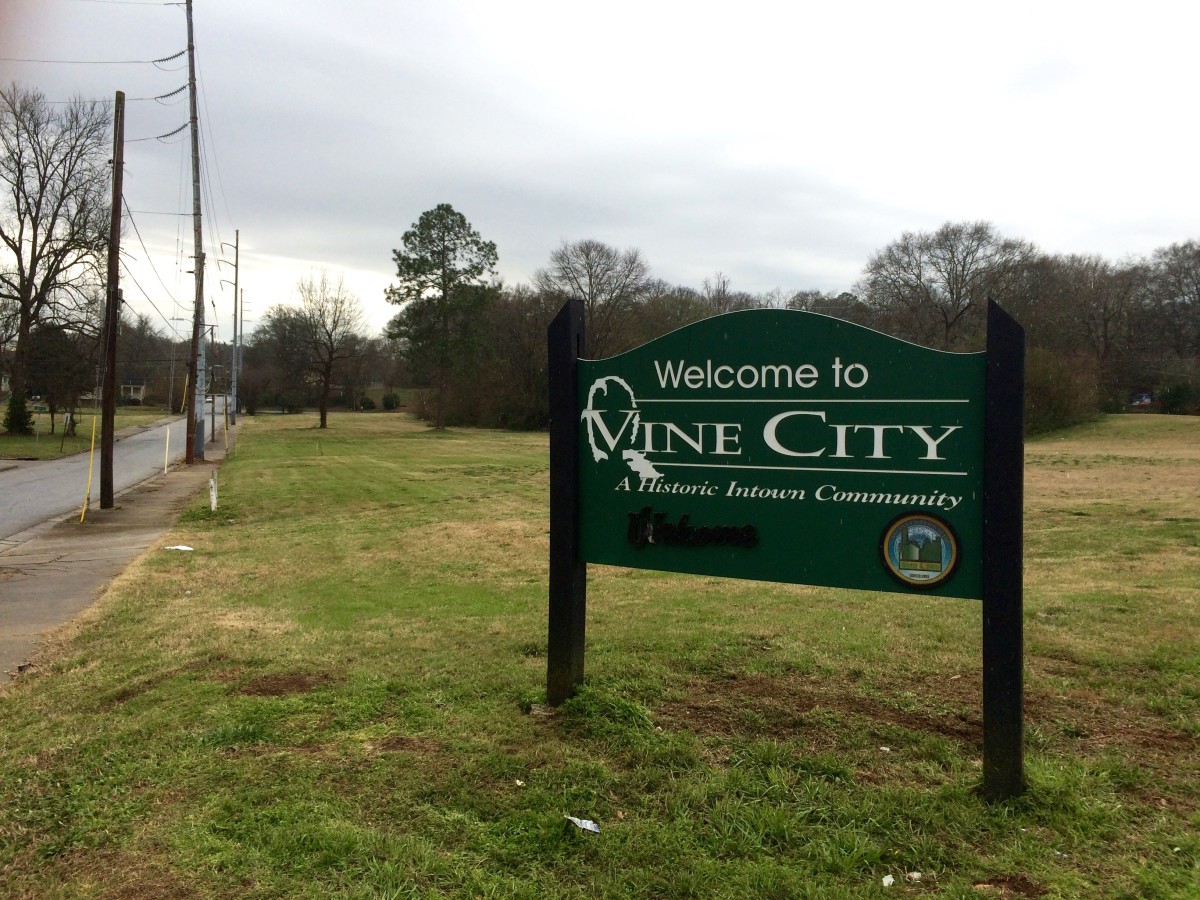 Next week, a group of Atlanta civic leaders is to meet for the final time to consider the planned greening of a roadway near the Falcons stadium. This project is central to the plan to build Mims Park. 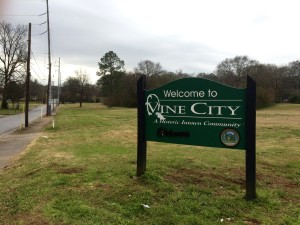 This gateway sign to Vine City, located at the intersection of Joseph E. Boone Boulevard and Vine Street, is on land that’s to be converted into a park. Credit: Boone Boulevard HIA

The park and improved roadway are expected to go a long way toward improving the quality of life in two blighted neighborhoods near the Georgia Dome – English Avenue and Vine City. These neighborhoods are separated by the road that’s to be improved, Joseph E. Boone Boulevard.

If it seems that the two neighborhoods have suddenly become a vortex of folks trying to do good deeds, they have.

The high profile community building program, Westside Works, seeks to create job opportunities and training for residents of neighborhoods west of the stadium and Castleberry Hill. Westside Works is part of the $15 million improvement program funded by the Arthur M. Blank Family Foundation. Blank owns the Atlanta Falcons football franchise that will compete in a $1.4 billion stadium being built to replace the Georgia Dome.

All these activities are the result of a deal clinched in March 2013. That’s when the Atlanta City Council agreed to Mayor Kasim Reed’s call for Atlanta to provide up to $200 million from the city’s hotel/motel tax to help pay for the new stadium. The public funding was portrayed as a crucial piece of the stadium’s financing plan. 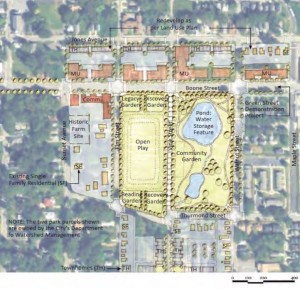 The debate over the proposed stadium focused attention on two neighborhoods that previously were noted mostly for flooding, poverty and crime. This may be the reason it seems unusual for so much attention to be paid to once overlooked neighborhoods.

In reality, the stadium’s construction is more coincidental, less causal, in regards to efforts to uplift English Avenue and Vine City.

As far back as 2004, then Mayor Shirley Franklin identified Boone Boulevard as one of six underserved areas in need of revitalization, according to the federal report the civic leaders are to review next week.

The Federal Highway Administration has recommended several projects in the area, including a reduction of travel lanes along Boone Boulevard. The Cycle Atlanta Phase 1 Study, led by the Atlanta Regional Commission’s Livable Centers Initiative, recommended using this space to add bicycle lanes. This road diet is part of the planned greening of the road.

In May 2013, two months after Atlanta agreed to help fund the new stadium, the federal government announced it had formed a coalition of federal agencies to improve the area. 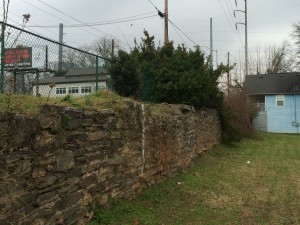 This stone retaining wall is adjacent to Joseph E. Boone Boulevard. Atlanta intends to create a pond south of the wall to retain storm water. The blue dwelling is to be demolished. Credit: David Pendered

Even the report the civic leaders are to review at their Feb. 5 meeting is the result of a program the EPA initiated before the start of the push for a new Falcons stadium.

The report is a Health Impact Assessment that was completed in April 2015.

The HIA is intended to inform efforts to upgrade the neighborhoods. The report says the neighborhoods experience: “[H]igh rates of poverty, crime, and boarded up businesses and residences. Residents in this area have raised concerns related to illegal dumping of garbage, flash flooding, mosquitoes, and unhealthy housing conditions.”

The HIA is not binding on any of the improvement efforts. But it does represent the federal government’s effort to uplift communities like English Avenue and Vine City.

The EPA has designated both of them as Environmental Justice Communities of Concerns. The EPA’s definition of such communities is: “[A] geographic area with a largely minority and/or low-income population that faces a disproportionately high burden of adverse environmental conditions.” 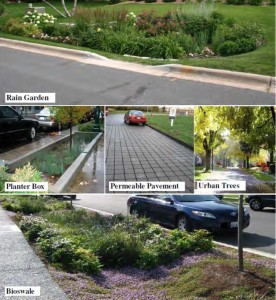 Green streets can be created through a number of approaches, as outlined in these examples. Credit: Boone Boulevard HIA

The report evaluates the health benefits of the greening of Boone Boulevard. The project is scheduled in the portion of the roadway located between Northside Drive and Joseph E. Lowery Boulevard, according to legislation approved last year by the Atlanta City Council.

The plan calls for the removal of two of four vehicular travel lanes. Bike lanes are to be installed. The work was to have been complete this summer, according to legislation the Atlanta City Council approved Jan. 20, 2015.

To address flooding and storm water runoff, the city is to install bio-retention areas similar to, but smaller than, the water feature at Old Fourth Ward Park. Wells for street trees will be dug and planted. Impervious surfaces will be converted to pervious surfaces in medium islands, and pervious paving in parking areas will be installed.

As this work gets underway, The Trust for Public Land is working to design and build the park at no cost to the city. TPL has agreed to raise the money to create the park on a 13.1-acre site the city owns, plus about three acres TPL is to purchase from private owners.

A previous plan for the park, by the National Monuments Foundation, never gained adequate funding. The contract approved Dec. 7, 2015 by the Atlanta City Council said the foundation will be consulted on design. The contract also notes that the park has not been officially named. 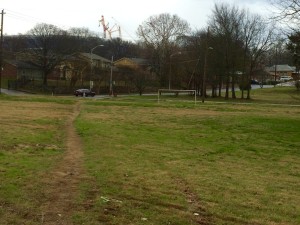 This footpath and improvised sports field is to be retooled into a pond to retain storm water runoff. Credit: David Pendered 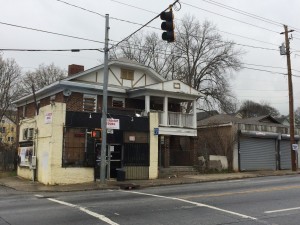 This grocery store on Joseph E. Boone Boulevard is located east of the intersection with Vine Street and will overlook the planned park. Credit: David Pendered

Previous Article
Reflecting on Downtown by Kelly Jordan
Next Article
Wit or wisdom?