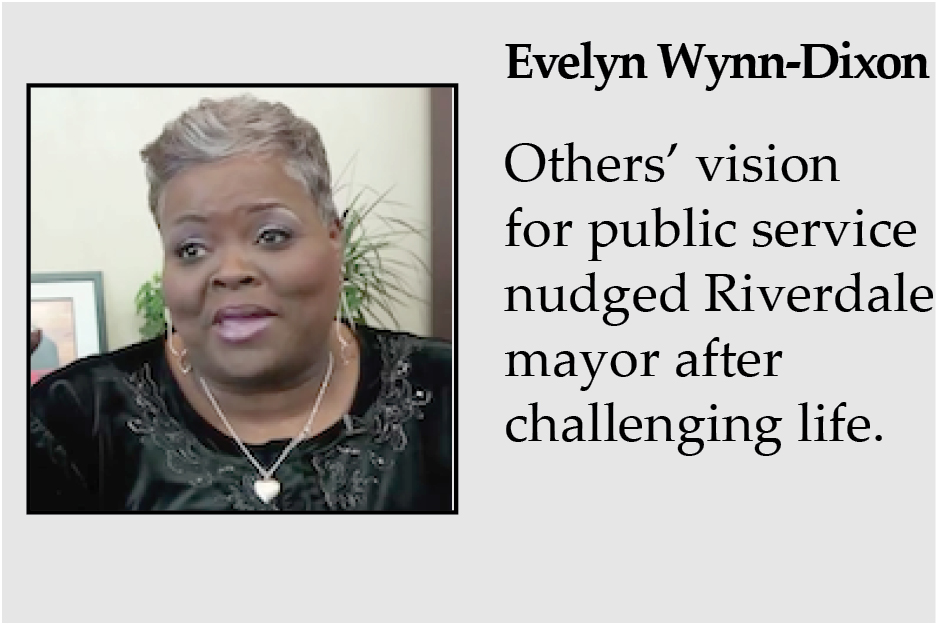 As I watch Dr. Evelyn Wynn-Dixon glide into her stride, telling her life story, I try to brush away a nagging premonition that we might soon see her firing up a Monday night crowd at a national political convention – but then again, other people’s premonitions is how she ended up in the mayor’s chair of Riverdale, Georgia.

There aren’t many American mayors whose official biographies start off quoting Billie Holiday’s “God Bless the Child,” but then again, not many life stories of mayors today better illustrate a later phrase in the same old song: “You can help yourself.”

Working as a case manager at Grady Hospital, Evelyn was amused one morning when Loretta Taylor, a nurse with whom she worked told her of a vision she’d had the night before: that Evelyn would soon enter politics and be featured in magazines. But that amusement turned to action the following Sunday when her pastor asked her to stand up amidst her congregation while he repeated a similar vision, telling Evelyn she would soon be mayor of Riverdale.

Evelyn’s spirit seems indomitable as it fills the capacious new government center in the city’s sparkling new Town Center today. Forty years ago, that same spirit was tired and beaten down as she stood on the Pryor Street bridge overlooking the downtown Atlanta connector wondering if it was time to end her life. At the time, the divorced mother of four was homeless, on welfare and had no vision of what was to come.

“When I was at my lowest is when my God made my promise to me,” she recalled recently in her office. “My God promised me that I can do anything and go anywhere and that’s exactly what He did. He kept His promise.”

Where Evelyn went next was back to school. Registering for classes one day at a local college, she found her high school transcript had not been sent to the school’s admission office and a clerk refused to register her for the semester. That’s when another vision occurred.

She not only worked several jobs to feed her family while paying to continue her own education – Evelyn eventually earned college and graduate degrees in gerontology and public health at GSU – her four children have followed her lead.

“Two of my sons went to the University of Georgia, one on a full academic athletic scholarship and he was an Academic First Team All American. The other went to Harvard for his MBA. My daughter is an attorney in Florida and my other son just got a veterinarian degree even while he’s serving a 10-year prison sentence. I call him my ‘penitentiary student.’ ”

Recently profiled on WXIA 11 Alive, Evelyn told reporter Matt Pearl, “When you are that low, all you want to do is to find peace and a way out.”

I met Evelyn when we were seated next to each other in December at the Metro Atlanta Chamber of Commerce annual luncheon. Now in her early 60s, Evelyn said she hopes to inspire other women who may find themselves in the same position she did years ago. “Don’t let your circumstances be your master,” she says in our Moments video. “You master it!”

Evelyn was driven to find a way out of her situation for both her and her children and serves now as an inspiration to her seven grandchildren and others who meet her.

As I watched her fire up an auditorium of women on YouTube with her life story, I got the feeling that she could … wait … there I go again.