Away from Facebook’s social circle, a connection to sacred circles 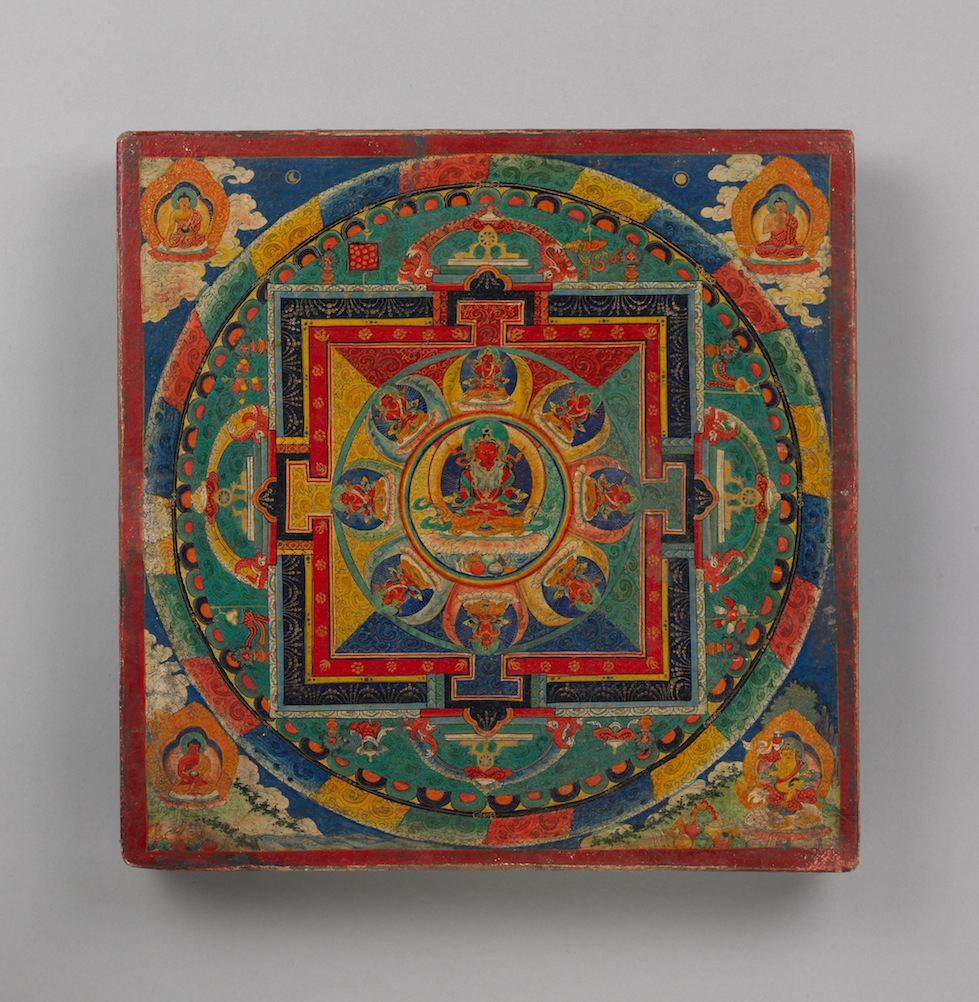 Nearly a billion people are on Facebook, which helps us track and take part in our social circles. So what happens when you unplug? 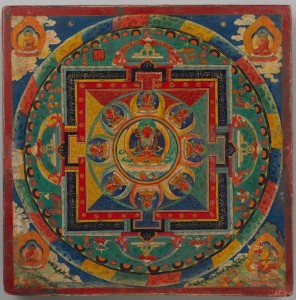 Sunday is the last day to see "Mandala: Sacred Circle in Tibetan Buddhism," and examples such as this: Mandala plate of Buddha Amitāyus (Tibet; 19th century. Pigments on cloth, mounted on wood. © Rubin Museum of Art)

That experiment began for me two months ago, and the space occupied by Facebook ended up filled with an ancient circle of introspection: the mandala.

You may have seen the ads on MARTA buses or banner ads, bringing attention to the mandalas on exhibit at two metro universities.

This is the last week for “Mandala: Sacred Circle in Tibetan Buddhism” at Emory’s Michael C. Carlos Museum. Through May 6, “The Sacred Round: Mandalas by the Patients of Carl Jung” is on exhibit at the Oglethorpe University Museum of Art.

Just going to a museum in Atlanta – one of the most wired cities in America — involves getting off the phone and computer and being present. These kaleidoscopic circles offer a way to greater mindfulness that is so easy to lose – and thus so much more valuable — in today’s swirl of information, networks and distractions. In the age of technology, a mandala is a simple tool for staying focused.

For centuries, Tantric Buddhists have drawn sacred circles to remind themselves that life is more than what we see around us. Filling a simple circle – a shape with no beginning and no end – holds a special view both into the soul and the universe: a path to enlightenment. 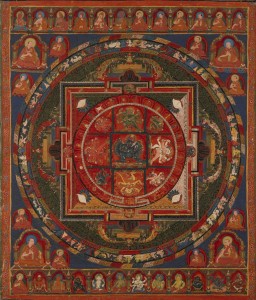 On exhibit at Emory University's "Mandala: Sacred Circle of Tibetan Buddhism," this is the Mandala of Thirteen-deity Yama Dharmarāja (Tibet; 18th century pigments on cloth, © Rubin Museum of Art )

Drawing the mandala is a form of meditation; studying one can cause the same effect.

At the Carlos Museum, a time-lapse movie shows how in February, monks from the Drepung-Loseling Monastery meticulously crafted the ornate mandala of bright green, raspberry, orange and blue sands. Currently under glass near where the movie plays, their creation will be erased on Sunday, erased, the sand taken to a creek and dispersed, carrying compassion to bless other parts of earth.

Is such an esoteric art form such a long stretch from Facebook? Most of the mandalas were arranged around a central figure, surrounded by other lesser figures – like a Facebook wall. The secondary figures usually represent some aspect of the central deity – just like our friends represent our various life stages and interests.

The mandala usually tells a story – that our present existence is transitory. Even in the 14th century and earlier, the mandala makers saw themselves as a click away from a new stage of life, with the constraints of time and physical limitations and the inevitability of death itself. 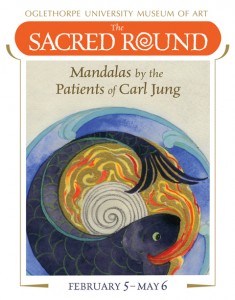 "Mandalas by the Patients of Carl Jung" will be on exhibit at Oglethorpe Museum of Art through May 6.

At Oglethorpe, the mandalas are intensely colored artifacts of the modern model of psychoanalysis, created between 1926 and 1945. Jung instructed his patients to seek their “divine core” through drawing and coloring. He told them to use simple symbols to present ideas from their dreams and thoughts, and to “work as carefully and perfectly” as possible. The circles, he had learned from personal experience, helped identify “the silent places of your spirit where you will find renewal.”

He saw mandalas as an eye into a patient’s interior; they were both the metaphor and means of finding one’s self – drawing was the process of healing and the mandala represented the healing itself.

“Thou thyself art even another little world, and hast within thee the sun and moon, and also the stars,” Jung wrote, quoting the early theologian Origen. My middle school daughter toured these exhibits last weekend with me, and she was right about the resulting feeling of catharsis. A simple circle somehow held so much power. 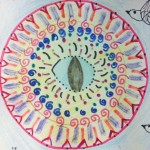 A mandala from Sunday, March 11, 2012. In Jungian psychology, the circle represents the inner journey of the individual.

Along with giving up Facebook for Lent, I had taken on a commitment to draw a CD-sized mandala each day – usually on my morning commute via MARTA. Some of my drawings were pretty uninspired, but the more I stuck with them, the more magnetic they became, and the more risks I took to branch out from colored pencils to other media.

I found myself more centered and focused, and more aware of my state of mind and emotions. As stark as a black Sharpie line was this realization: Facebook, email and texting have become my default activity. 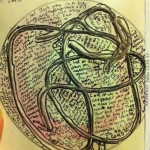 Being still and in the moment, aware and appreciative of my physical surroundings, feels uncomfortable. Plugging in, I can be wherever else I’d rather be, entertained by my “friends,” disconnected from present company and reality.

The ancient mandalas serve as a reminder that we aren’t the first people to struggle with inane distractions, crazy makers and time wasters. The complex circles by Jung’s patients showed the immense human effort to connect – to our past, our present, and our significant others. To stay healthy and centered.

Facebook gives us a billion ways to connect around the globe, with people we may never see in person. A mandala is a powerfully simple way to re-connect with the identity central to that circle – you.