Fair Share for Transit released Tuesday a $4 billion wish list of projects and a policy statement on what is says is the need to invest sales tax dollars in transit and other modes of alternative transportation.

The document was released in advance of a Thursday morning meeting of the five voting members of the executive committee of the Atlanta Regional Transportation Roundtable. The committee is to work on the draft list of projects to be put before voters for funding in 2012.

“If we do not advance viable alternatives now … we will mark the passage of half a century since our region took a significant step forward on permanent public transportation while cities like Dallas and Denver, Charlotte and Houston, Tampa and Phoenix celebrate what they have built.”

And the clock is ticking.

By Aug. 15, the executive committee must produce its draft list of transportation projects to be funded by the proposed penny sales tax. By mid October, the full roundtable must adopt a final list – one that will appear on the ballot.

Presumably, the voter education and political campaigns will begin in earnest after the list is finalized.

Fair Share calls for the roundtable to endorse what it calls three categories of investments:

The report acknowledges that the cost of these projects exceed $4 billion. And $4 billion would be 60 percent of the sales tax projections, up from the 50 percent rate Fair Share sought in June.

Fair Share recommends starting with a total of $1.2 billion for the second and third items on the list. The first item – guideway systems – would be funded with any money that remains after the other two categories are addressed. 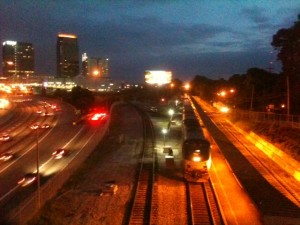 The allocation of support for key ancillary projects include:

The systems should serve “both the growing north and economically disadvantaged southern parts of the region,” the report states.

The report actually is divided into two sections – the project list and the “white paper.” The white paper reinforces previous positions of Fair Share, including:

Fair Share for Transit is an initiative of the Livable Communities Coalition that now counts nearly 75 supporters. Their georgraphy spans from the Lilburn Community Improvement District to the Henry County Chamber of Commerce.

Fair Share was launched almost four months ago to promote the idea that transit, bike and pedestrian projects should get a big piece of the proposed penny sales tax for transportation.