Falcons funding deal oh so close, but politics and opposition could extend debate into first quarter of 2014

The stage is all but set for the Atlanta City Council to approve on Dec. 2 the community benefits deal that’s required for the city to provide its $200 million to help pay for a new Falcons stadium. 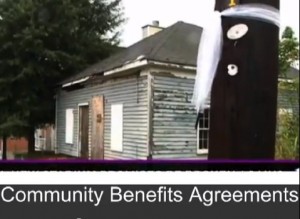 A video released late Thursday intends to raise awareness of the need for a binding agreement to restore the neighborhoods. Credit: “Making the Case for Vine City and English Avenue”

Whether that will happen remains a huge question. There likely is a good deal of political pressure mounting on one side for the council to pass the measure, and on the other to defer a vote until two newly elected citywide councilmembers take office in January – Andre Dickens and Mary Norwood. Both were opposed by Mayor Kasim Reed.

In addition, a scathing YouTube video was posted late Thursday. The two co-spokesmen are the Rev. Anthony Motley and the Rev. W.L. Cottrell, Sr. – both with deep ties to the stadium communities and both of whom have criticized the city’s process for crafting a community benefits deal.

Here’s the posture after the Community Benefits Plan Committee met Thursday night, and the scenario that would enable the council to vote this year:

This schedule is extremely rigorous for a deal that is supposed to guide the spending of $30 million in four neighborhoods: Vine City, English Avenue, Castleberry Hill, and a portion of Marietta Street. Half the money is coming from a special tax fund established years ago by Atlanta, and the remainder is from the Blank Foundation.

For starters, there’s no guarantee the benefits committee will approve a plan at its next meeting. There’s still a lot of work to be done to compile an acceptable version of the plan.

There’s also the politics within the council.

Councilmembers-elect Dickens and Norwood defeated incumbents who had the mayor’s backing. Both are said to have strong feelings about the community benefits deal and may want a chance to put their imprints on the plan. Meanwhile, both of the soon-to-be-departing incumbents may advocate for a vote on the proposed benefits deal before they leave office. Members also have their constituents to keep in mind, and some have said they may want to convene a public hearing to gather input to the proposed plan. 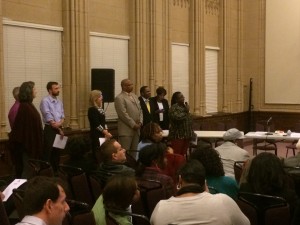 Makeda Johnson spoke as representatives of four neighborhoods presented their unified vision of what the community benefits deal should provide. Credit: David Pendered

And there’s the politics between the council and mayor. The mayor is said to be pushing for a vote this year. Regardless of whether the council wants to help the mayor meet his timetable, the council does have its future relations with the two incoming members to contemplate.

Reed’s political fortunes also are in the mix.

The impact of the Atlanta Braves leaving the city during Reed’s watch still is unfolding – and so far it’s not been good for the mayor. The notion of tearing down Turner Field isn’t sitting well in some communities, where the word “wasteful” arises.

The loss of the sports franchise has overwhelmed an election-related conversation involving the mayor.

This one is about why so many candidates who were backed by Reed and the political action committee he largely funded were defeated outright or cast into runoff elections. Some business leaders who donated to the PAC are muttering about joining the mayor on his effort to sway the outcome of council and school board races.

Regarding the actual benefits plan, a good bit of work remains.

The current plan is nine pages and is draft No. 3. A fourth draft is to be posted Friday on the website of Invest Atlanta, the city’s development authority.

Ernestine Garey, Invest Atlanta’s COO, said the fourth version will include concepts that were either overlooked in the third version, or which were brought to light by the joint presentation Thursday by representatives of the four stadium neighborhoods.

The neighborhoods have had a somewhat bristly relation for several months. For the first time, representatives stood as a group on Thursday and presented a collective vision for concepts they want included in the community benefits deal.

Presuming that all concerns about the plan are ironed out next week and the plan is approved, it will proceed to the council’s Finance Committee, chaired by Felicia Moore. Moore defeated a challenger backed by Reed.

The fate of the measure is uncertain in Finance Committee. Chairs have a certain amount of leeway, and often – but not always – are willing to permit same-day consideration legislation that is submitted directly to the committee, rather than submitted to the council and referred to committee. Of course, the chair has the prerogative to call for a public hearing, which would delay consideration.

Now say the Finance Committee approved the measure and set it on the calendar for the Dec. 2 meeting. The council could approve it.

The council also has a history of delaying legislation by pulling it off the calendar and sending it back to committee for further deliberation.

As an aside, Reed has agreed to speak at the Nov. 20 meeting of the Northwest Community Alliance. The group’s chair, Mike Koblentz, was at the Thursday meeting and predicted that a large portion of the potential audience for Reed’s remarks will skip that meeting in order to attend the benefits plan committee meeting.