Elena, David and Lily in one of Savannah's town squares under the shade of historic trees. (Photo by Maria Saporta.)

Sometimes having a fresh set of eyes on where you live helps you better appreciate what works and what’s lacking.

For me, those fresh sets of eyes belonged to my sister, Elena Saporta, and my niece, Lily Consuelo Saporta Tagiuri, who came to spend the better part of a week visiting Atlanta and Georgia.

I asked if they would be willing to share their impressions of what they saw and what they experienced. Because both are creative and intellectually curious, I wanted to hear how they viewed my corner of the world. 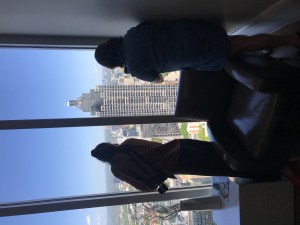 Lily and Elena admire Atlanta’s skyline during a visit to the Commerce Club. (Photo by Maria Saporta.)

Elena left Atlanta in the 1970s. She has been living in Cambridge, Mass., for decades where she is a landscape architect and activist. The last time she came here was 10 years ago when my son, David Luse, graduated from Georgia College in Milledgeville.

Lily last visited Atlanta when she was eight. She came to attend the memorial services for her grandparents — Ike and Nora Saporta — who died five months apart. Now Lily is 31 — almost 32. She is an environmental industrial designer who now lives in Paris after having spent years living in New York.

Their impressions — shared separately — were remarkably similar, which may not be surprising given the way we were raised.

“My first impression was that I felt enveloped in a green soft blanket — comforted by all the trees,” said Elena, who in the 1970s was a co-founder of the Downtown Tree Guild along with Jim Cothran, Bob Young and Bob Wagner — the predecessor organization of Trees Atlanta.

“The part that felt very comforting and familiar to me is that it still feels like a city in a forest,” Elena continued. “People are very open. They assume you are friendly. In the North, you feel people are suspicious of you, and they let you in over time. In the South, you are welcomed with open arms rather than suspicion.”

Lily also said she loved how “lush” Atlanta is.

“In many ways, my mother has tried to recreate that lushness at her home in Cambridge,” she said. “The smell is just so fresh.” 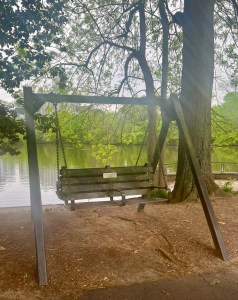 They walked to Piedmont Park, and they saw the bench swings we had placed in honor of Papa, who was known as “Mr. Piedmont Park” for decades of activism protecting it from numerous off-the-wall plans.

“It really felt good to be back in Piedmont Park and experience the lushness,” Elena said. “You do feel enveloped by the green.” But she added that Piedmont Park felt a little worn and that the Noguchi Playground could use a fresh coat of paint.

Both Elena and Lily connected deeply with Atlanta civil rights history and Martin Luther King Jr. — partly because of our family history.

“When I walked into the [historic] Ebenezer sanctuary, I burst into tears. It was so emotional,” Elena said. “Mama and Papa both threw themselves into the civil rights movement. I remember when white people wouldn’t walk on the same side of the street as Black people. That was very hard for me. We have seen cataclysmic change in our lifetime.”

Lily attended the Martin Luther King Jr. Open School in Cambridge, and the civil rights movement and King were a “big part of my education growing up.” She also was moved to tears visiting the King Center and Ebenezer.

“Blacks in the South seem to be much more empowered than they do in the North,” Elena observed. “It is a city that has overcome so many obstacles, In Atlanta, people are very proud of their city. There’s a feeling of boosterism. It’s a shared spirit people have in the city.” 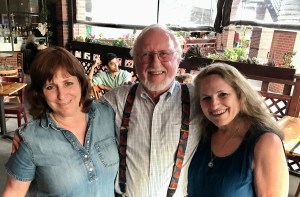 Elena and Maria with Bill Eisenhauer, who used to babysit them when they were 4 and 7 years old. (Photo by David Luse.)

Lily said her mother observed that people seemed happier in the South and that they are kinder and warmer than people in the North.

She then asked her mother why she left Atlanta.

“Atlanta is car centric,” Elena responded. “I wanted to live in a place where I didn’t need to have a car. It would be very hard for me to live in Atlanta. It’s very spread out as a city.”

For Lily, being in Atlanta reminded her of her youth.

“My experience in Atlanta is rooted in memory and nostalgia,” she said, remembering her grandparents. “I’ve been trying to imagine them in these spaces.  I remember how they were always laughing. I knew they were part of the holocaust. My relationship with them was very jovial. I remember Pappou writing and drawing with a Sharpie on my arm.” 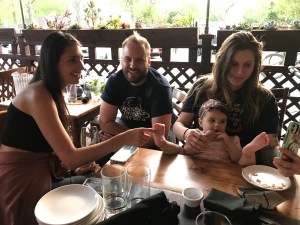 Elena and I talked about how fortunate we were to have been born to our parents.

“Mama and Papa exposed us to as much as they could,” Elena said. “They were the kind of people who embraced the places and the people around them.”

On our way to Savannah for the weekend, we stopped to visit the Monastery of the Holy Spirit in Conyers. Elena remembered the historic entrance surrounded by a wall of magnolias on either side leading up to the monastery. The new entrance has much more pavement and is geared for tourists — lacking the romance she remembered from her youth.

We did go by the peaceful lake next to the monastery, and that reminded us of our Sunday outings to Silver Lake — which once belonged to Oglethorpe University.

Elena and Lily were both taken by Savannah’s downtown with its historic town squares — lined with trees that are hundreds of years old. 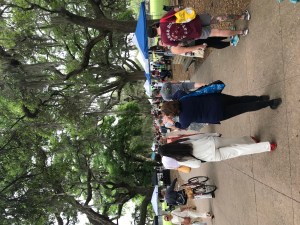 “Savannah is just an incredible example of green infrastructure,” Elena said, adding that it is still relevant nearly 300 years after it was designed. “It’s designed with the human scale. There’s a wonderful intimacy and comfort. It’s not just the squares but the connecting streets.”

Lily described Savannah’s atmosphere as “honey air” with people moving at a nice pace with the city.

“Savannah is so dreamy,” Lily said. “It should be a blueprint for any area that hasn’t been built. The amount of greenspace is intoxicating. We need to value green space like we value developments. Without the parks, this city wouldn’t be anything special. It’s not abstract. The ancient trees envelop you. Urban planning students should definitely come here.”

For Lily, the trip was a call to action. “Greenspace is vital,” she said. “Public greenspace makes the air better; it makes your mood better. It’s a no-brainer.” 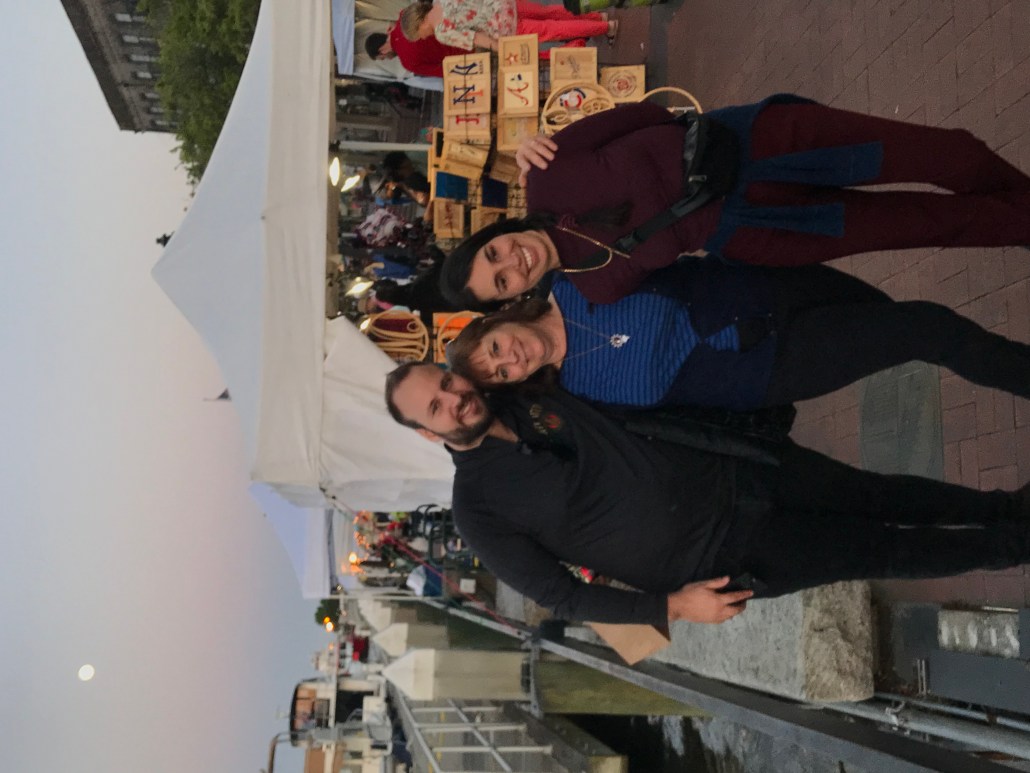 David, Elena and Lily along Savannah’s river front under a full moon. (Photo by Maria Saporta.) 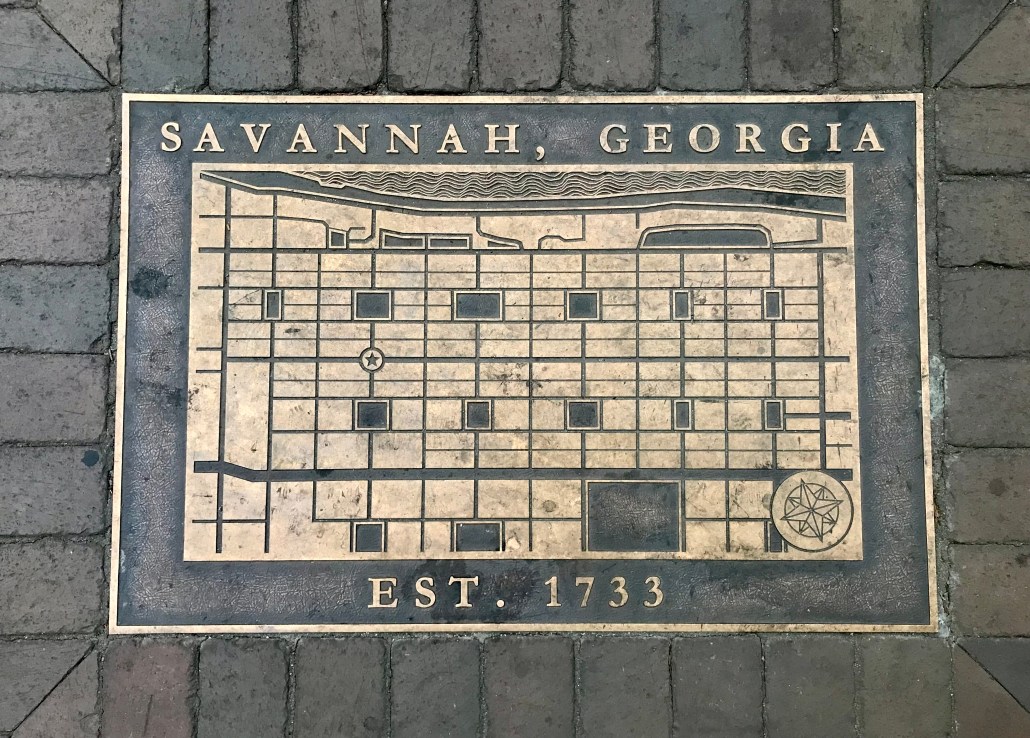 A plaque embedded in one of Savannah’s sidewalks displays the enlightened 1733 urban design of a city built around greenspace. (Photo by Maria Saporta.)

Previous Article
On-demand transit expands across Georgia, putting pitches and criticisms to the test
Next Article
Like a virus we can’t shake, mass violence is mutating