Two matters that will affect the future of transportation options in DeKalb County and other eastern counties of the metro region are likely to rise in debate when Legislature convenes. 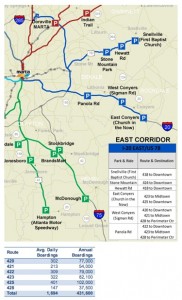 One involves the fate of the 432,000 commuters who use Xpress buses to travel through DeKalb. Funding for the commuter bus system is slated to end in June unless Gov. Nathan Deal and the General Assembly provide operating funds.

The other issue is DeKalb’s proposed sales tax to pay for road and sidewalk improvements within the county. The Legislature has to authorize the tax before voters could cast their ballots.

DeKalb has a particularly keen interest in the Xpress commuter system, given its high usage:

The relative spike in ridership in DeKalb is of note because it occurred at a time Xpress lost ridership in six of the 12 counties it serves.

According to GRTA, which operates Xpress, two factors contribute to the dip in ridership: Falling gas prices, which makes automobile trips less expensive; and the weak economy, which results in fewer folks commuting to work.

The counties where boardings increased are: Cherokee; Clayton; Coweta; DeKalb; Gwinnett and Henry.

The counties where boardings decreased are: Cobb; Douglas; Forsyth; Fulton; and Paulding.

Ridership in Rockdale County was virtually unchanged, at slightly over 238,200 a year.

The future of state funding for Xpress will become more clear when Deal releases his budget later this month.

Deal has supported Xpress during the past two years. Service would have been reduced, if not ended, during that time because of falling contributions from local governments and federal sources.

This year, the state provided about $5.4 million for Xpress and that pot of money is to run out in June.

To put that in perspective, Xpress is expected to require almost $200 million over the next decade, in operating and capital expenditures, to continue its level of service, according to estimates GRTA has provided.

The proposed sales tax for transportation in DeKalb is part of the county’s legislative package and was cited in the budget recommendation released in December by DeKalb CEO Burrell Ellis.

Details of the proposal haven’t been widely discussed. But the idea behind it is clear in this statement from Ellis’ budget proposal:

These measures are on the table even as Congress considers National Infrastructure Bank discussed by President Obama.

Atlanta Mayor Kasim Reed has indicated he’s pinning his hopes for transportation upgrades in Atlanta to the creation of such a bank.

A proposal was introduced in October in the House and Senate, but it’s future is viewed as dim. The two companion bills have just one co-signer, and neither bill calls for any offset in federal spending to get the $5 billion a year needed to fund the bank.