Georgia’s safety net can continue to address incredible needs, provided that its leaders respond creatively to reductions in government funding and evolution of the philanthropic community. 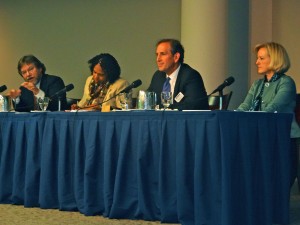 That message emerged from a two-hour panel discussion Wednesday at the Carter Center that was hosted by the Georgia Budget and Policy Institute during its Spring Policy Forum.

“We have to work smarter and leverage our resources; leverage is an easy word, but it’s hard to do,” said Bill Bolling, executive director of the Atlanta Community Food Bank.

The program began by delving into the process of federal spending cuts. The speaker, Joan Huffer, emphasized that while the federal budget is a complicated entity, the lawmakers who shape it respond to their constituents. For that reason, advocates should continue making the case for social welfare programs.

Huffer directs the Federal Budget Initiative for the Center of Budget and Policy Priorities, which is affiliated with the GBPI.

Huffer went on to give some recommendations on how to lobby Congress. She also noted that Georgia Sen. Saxby Chambliss has been a strong supporter of SNAP. 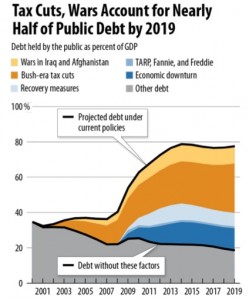 A significant portion of the federal deficit stems from wars and tax cuts. Credit: CBPP

“I can’t tell you how important it is to tell the stories about the people who are affected in your area,” Huffer said. “If you start explaining who we’re talking about, if we tell those stories, we can push back and we can change the course of this debate. There’s power in this voice and we have to get out and do it. We have to get out there and work in collaboration.”

Clarke County school Superintendent Philip Lanoue brought a message about how Georgia’s public schools are struggling to educate children who come to school hungry and less than healthy. Lanoue said the starting point in any discussion of public education what people believe about children.

“One thing I would ask of everyone is, ‘Do I really believe all kids can learn,’” Lanoue said. “One of the things we are learning is we cannot make it all the way when the children are not healthy, when we’re giving away 500 bags of food on Fridays.”

About 82 percent students are on free or reduced-price lunches in the Clarke County School District. Nonetheless, the district ranks as the state’s top Title I Distinguished District, for its work to help disadvantaged succeed academically; has partnered with UGA to be a Professional Development School; and is a Top 100 Communities for Music Education.

Lesley Grady, a senior vice president with the Community Foundation for Greater Atlanta, said the philanthropic foundation has its own set of challenges to face, even while needs continue to grow.

Grady said there’s a lot of talk about changes in tax laws and charitable deductions. Non-profits also have to be more transparent, accountable and forward-thinking.

“We have shifted in the past couple of years to looking at the financial stability and strategic vision of organizations, in addition to programs,” Grady said. “When you have a sound, diverse financial base, you have more stability in crazy times. If you have good programs, you can see trends coming up and move to counteract them in advance. Of the tens of thousands of grant requests we get a year, there are very few Bill Bollings.”

Bolling talked a good bit about trust and accountability. He said the non-profit world has to be proactive in addressing fraud, which he said is more of a perception than a reality in Georgia.

“I think we’ve really got to name that: Is there fraud, or is there not?” Bolling said.

Bolling said he was hopeful after a recent conversation with a lawmaker whose initial position was that fraud is rampant. The good news, Bolling said, was that the lawmaker was willing to hear the other side of the story, and to ask for talking points he could provide when the issue of fraud emerges.

Part of the issue is the roar of public comment, Bolling said: “Facts don’t matter anymore, because there are so many of them.”

Huffer jumped back into the conversation at that point and underscored the need for the advocates to make their case with facts and true anecdotes of real people at risk.

“Don’t throw out the data,” Huffer said. “Ultimately, you can undo a lot of misinformation if you have enough.”

Alan Essig, GBPI’s executive director, concluded the event by noting that there never is enough money to meet all needs and expectations. The challenge of working with government budgets today is to make the best use of resources.

“There are different options; some are worse than others,” Essig said. “There will be cuts no matter what. The best case scenario is not avoiding cuts. The best case is minimizing cuts.”