Indications of fraud and/or abuse in Atlanta’s federally funded workforce training program, revealed by a city audit made public Monday, have been turned over to the federal Department of Labor. 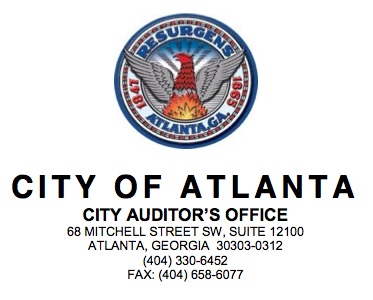 The city auditor found that indications of fraud and/or abuse in the city’s workforce training program and forwarded them to the federal Department of Labor.

In addition, the audit recommends that Atlanta’s mayor and city council consider discontinuing the program because of performance and compliance risks. The agency’s budget approaches $10 million a year.

Atlanta Chief Operating Office Duriya Farooqui received the audit in October 2012 and issued her response Monday. Farooqui wrote that the audit is not what she expected, and she refuted some of its findings.

City Auditor Leslie Ward indicated in her transmittal letter that she will respond to Farooqui’s comments before a council committee considers the audit. The Community Development Committee could take it up Feb. 19.

The Atlanta Workforce Development Agency is housed in a bureau in the executive office of the mayor. The agency functions largely out of public awareness, but it plays a significant and possibly increasing role in placing workers in private sector jobs.

The audit does not specify what indications of fraud were uncovered. The audit states:

Another finding questions the companies that were paid portions of the $1.6 million to train workers:

Other concerns raised in the audit state:

The audit of the Atlanta Workforce Development Agency sets up a discussion between Mayor Kasim Reed’s office and the council. The council voted June 20, 2012 to request an audit of the program.

The AWDA historically has not received a great deal of public attention, partly because it is managed out of the mayor’s office and paid for with federal funds.

Atlanta has put some muscle behind its workforce training authority. For example, the city required that some of the sought-after jobs at the airport’s restaurants and shops had to be filled by individuals who had been processed through the workforce agency.

There’s been talk of implementing similar requirements for companies that are helped by Invest Atlanta, the city’s development authority.