As the nation focuses on a case of Ebola in a Texas hospital, two students at Emory University are raising money to develop a test they think could identify the virus in the field. 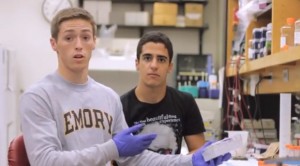 Brian Goldstone (left) and Rostam Zafari are seeking $15,000 in crowdfunding to further the research of their proposed field test kit to diagnose the Ebola virus. Credit: indiegogo.com

The freshmen think they have figured out a way to test for the virus without the need for expensive machinery that’s generally available only in hospitals – too far from sick people in villages in Africa to be of practical use.

They’re secretive because of the intense competition for such a treatment. But they have posted a video on a crowdfunding site and raised more than $9,300 of the $14,500 they think they need to develop a cheap and fast detection method.

Evidently, the two students aren’t the only ones who are pursuing a test based on the strips used to test for urinary tract infection.

But Brian Goldstone and Rostam Zafari may comprise the only research team founded by two pre-med students, both of whom are wrestlers, who have thrown their dream into the cloud.

The project started with a challenge from their biology teacher, Rachelle Spell: Earn extra credit by devising a cheap, fast test for the Ebola virus. They got help from a senior advisor, an MBA candidate, in their living-learning dorm, a facility where Emory hopes to promote a sense of social entrepreneurship among the dorm’s residents. 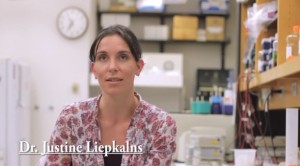 Emory biology instructor Justine Liepkalns, with a doctorate in immunology, says on a crowdfunding video the results are worth pursuing. Credit: indiegogo.com

In mid September they floated their idea. Now it’s one of a few that have gained backers on their particular crowdfunding site. Here are a few other results that turn up on a search of “Ebola” on indiegogo.com:

Emory biology instructor Justine Liepkalns says on the video that she supports further evaluation of the test the Emory students have devised.

“I’m interested in this project because it allows for the testing of the Ebola virus and a kit,” said Liepkalns, who earned her doctorate in immunology from Emory.

“All we need is the money to test and see if this kit works,” Liepkalns said. “If it did, it would allow for a cheap, easy and portable way to test for the Ebola virus with no use of machinery.”

One problem with the current method of testing for the Ebola virus is that it involves drawing blood from individuals, transporting the blood to a facility, and then running the blood through a device called a polymerase chain reaction machine.

According to a statement from Emory:

Spell said in the statement that the students have benefitted even if their product doesn’t come to market. And that’s not just because they earned their extra credit.

“Statistically, we know that biotech is very competitive and has a very low likelihood of working out,” Spell said. “But to even attempt something like this offers a great learning experience.”