Fixing state’s roads, rails to handle freight could cost up to $20 billion

The Georgia Legislature’s new report on transportation funding recognizes the need to improve the state’s freight handling roads and rails, but goes into little detail. 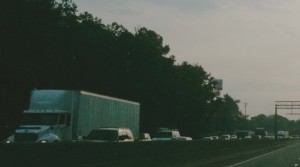 The report does observe that freight must be accommodated. The report does not note that up to $20 billion is needed to improve roads and rail for the exclusive purpose of moving freight on rails and roads, according to a consultant’s report released in 2011 by the Georgia Department of Transportation.

The new report created by the Legislature’s joint House-Senate committee is expected to serve as the launching pad in the session that begins Jan. 12 for discussion about raising funds for transportation projects. The report was released Dec. 30 by a committee created by the 2014 General Assembly with the support of Gov. Nathan Deal.

The committee’s report is being viewed as much for what it omits as what it includes.

The capacity of Georgia’s roads and railroads to handle freight is not a highlight.

This is a concern in part because of the state’s trend of attracting manufacturing plants, such as Caterpillar, Baxter pharmaceuticals and the KIA plant in West Point.

These industries need to move materials and finished product. The story of KIA shows how quickly business can shift its preferred modes of transportation.

KIA chose the West Point site in part because it was served by a CSX rail line, according to a report last year at a meeting of the Georgia Regional Transportation Authority. West Point is at the end of the line, but the line does connect to Atlanta and beyond, and to Georgia’s ports in Brunswick and Savannah. 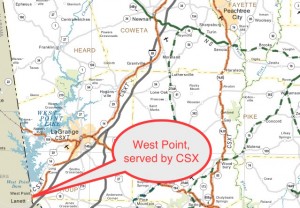 The KIA manufacturing plant in West Point was expected to be served mainly by rail. The plant has increased its service by trucks, according to a GRTA presentation. Credit: GDOT, David Pendered

As KIA’s business evolved, the plant came to rely on an increasing number of trucks for service, according to a presentation by Kirk Fjelstul, GRTA’s general counsel, who had toured the facility.

GRTA has an interest in freight because it’s charged with improving the region’s mobility and air quality – both of which are impacted by tractor-trailer rigs.

The report from the Legislature’s committee does observe that up to $1.5 billion a year in new transportation investments are needed for purposes including:

That said, GDOT’s 2011 freight report predicts that growth in the container trade through the Savannah port will more than quintuple by 2050, compared to 2011.

These containers are an increasingly popular mode of transport – they encase cargo in a metal box that can easily be loaded from ships to train cars or trucks, and vice versa. Containers are expected to comprise the bulk of the cargo transported on the large ships that will visit Savannah and travel through the expanded Panama Canal after it opens.

Four highways in Georgia now serve about 20,000 tractor-trailers a day, according to GDOT’s freight report:

Previous Article
Are your 2015 resolutions simple, slow, and satisfying?
Next Article
Fixing state’s roads, rails to handle freight could cost up to $20 billion