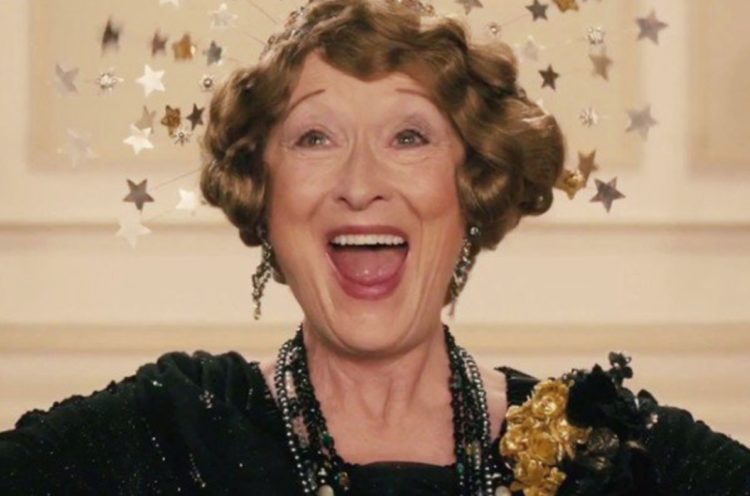 Deliciously arch and impeccably crafted, “Florence Foster Jenkins” is based on the true story of a woman with a heart of gold and an ear of tin.

That’s she’s played by Meryl Streep is, perhaps, inevitable. But that doesn’t make it any less of a treat. 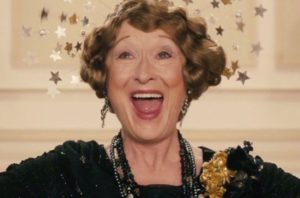 A wealthy heiress with a passion for music and opera, Florence is introduced as she descends onto a stage, wings affixed to her shoulders, harp in hand.  She’s there to “inspire” Stephen Foster to compose “Oh Susanna.”

It’s Manhattan in the mid ‘40s. World War II still rages abroad, but on the home front, there remains a place for the arts. And for art patrons like Florence. Unfailingly generous, she’s a soft touch – for nobody’s and for A-listers like Toscanini.

Alas, Jenkins also fancies herself a singer, a notion her devoted second husband, St Clair Bayfield (Hugh Grant), is unwilling to disabuse her of. He is her benign enabler – in top hat and tails – as part of her public performances or tenderly tucking her into bed in before returning to his own small apartment.

The couple has an arrangement of sorts. They have never been intimate because Florence contracted syphilis on her wedding night – a gift from her first husband. But otherwise, they are a loving pair and when Florence decides she’d like to sing at Carnegie Hall, he does everything in his power to make it happen.

But – and this is important – in such a way that she will not be humiliated or mocked. 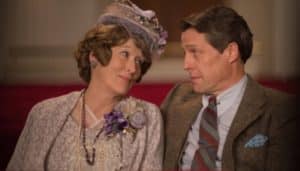 Crucially, Streep also refuses to mock Florence. This is yet another razor-sharp performance – an expert exploration of the art of tragi-farce, if you will. Florence may have been a slightly dotty dowager with more money than self-awareness. But she is also, in her own way, courageous

Yes, it’s funny that one of her charities is the Brooklyn Orchestra for Distressed Women. And yes, when she sings, her voice is somewhere between a cat in heat and a moose call. But Streep never condescends to the role; indeed it takes a huge amount of talent (and work) to sing so badly so beautifully.

Further, the star finds something unique in this woman. The ads suggest a variation, perhaps, on her portrayal of Julia Childs in “Julie and Julia.” But Streep doesn’t do variations. She does authentic – which is also what Florence’s tony voice coach says about her singing. (And no wonder; he makes more off her lessons than he does from his day job at the Met).

Director Stephen Frears, who’s done everything from “My Beautiful Laundrette” and “The Grifters” to “Philomena” and “The Queen,” clearly relishes the opportunity to work with Streep. And he’s fascinated by the quirks of the fabulously wealthy – from elaborate seating charts for chichi dinners to a bathtub full of Florence’s favorite food, potato salad.

Also fine is Simon Helberg as the rehearsal pianist hired to accompany Florence. There’s a whiff of Austin Pendelton, a hint of a young Dustin Hoffman in his performance. And it’s touching to watch him transform from embarrassed outsider to, well, true believer. Or at least, co-conspirator.

Still, it all comes back to Streep.  As she did in ‘The Iron Lady,” she mines the humanity in a role others would’ve been content to wrap in winks and nudges. Her Florence is an often silly but ultimately stalwart woman.

And just watch her struggle with a roll of scotch tape; it’s a mini-lesson in comic technique at its finest.

“Florence Foster Jenkins” may be an oddity of the first order. But as Florence herself says, “People can say I couldn’t sing, but no one can say I didn’t sing.”

This movie sings, even when its heroine can’t.

Previous Article
MARTA to replace rail car fleet by 2026; seeks cars that can travel streets, freight lines
Next Article
Shelter of the university by Kelly Jordan #7