The purchase price of a residence is deemed affordable under federal guidelines in all but two metro Atlanta counties, according to a new report from the Atlanta Fed. 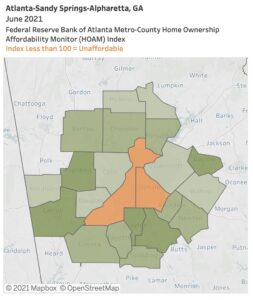 DeKalb and Fulton counties are the only two in metro Atlanta where for-sale homes are deemed unaffordable in a report by the Atlanta Fed. (Image via atlantafed.org)

DeKalb and Fulton are the two counties deemed unaffordable under HUD guidelines. The remaining 21 counties are considered affordable, based on a comparison of the median price of a for-sale dwelling and the median household income in that county, according to the latest release of the Atlanta Fed’s Home Ownership Affordability Monitor.

As a region, the Atlanta-Sandy Springs-Roswell statistical area scored 111.7 in for-sale housing affordability. A score of 100 or higher is deemed affordable by HUD standards, which define affordability as up to 30% of household income. This is the region’s snapshot, with information current through June: 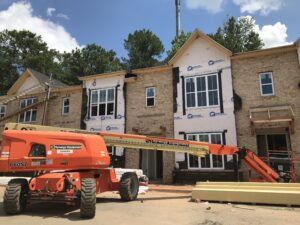 Gwinnett County’s supply of for-sale residences helps provide a countywide affordability rating of 108, where any number above 100 is deemed affordable, according to the Atlanta Fed. (Photo by David Pendered)

This information adds another level of complexity to the continuing discussions of the region’s response to rising housing costs, including those being led by the Atlanta Regional Commission’s Metro Atlanta Housing Strategy, and the Atlanta Regional Housing Forum, which is staffed by ARC and Atlanta Neighborhood Development Partnership.

Policy makers have concerns in addition to human costs related to housing affordability. The region’s economic development is viewed as threatened.

Metro Atlanta’s high rates of growth over recent decades have resulted from companies that have moved to, or expanded in, the region partly because housing prices were lower than in competing regions. Lower housing costs resulted lower salaries paid to attract workers, thus reducing personnel costs. 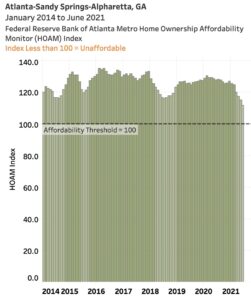 As a region, metro Atlanta’s for-sale residences have not exceeded HUD’s affordability guidelines since at least 2014. (Image via atlantafed.org)

A 2019 report by CBRE, a global real estate firm, showed that Atlanta had the second-lowest cost of housing among the nation’s Top 10 tech markets, just above Raleigh. In 2015, CBRE reported average IT salaries in Atlanta were $82,540 compared to $116,217 for a comparable IT segment in Silicon Valley. For metro Atlanta, the loss in future job growth could be measurable if the region’s housing prices become comparable with competitors.

The price of a purchased residence has risen significantly in the past year in metro Atlanta. A rise in prices was the significant driver in the loss of affordability.

Metro Atlanta experienced a 12.5% decline in the affordability of a purchased residence, according to a statement released in conjunction with the Atlanta Fed’s report.

The national comparison is a decline of 11.9% in housing affordability, the sharpest drop in national affordability since 2014, according to the statement. The year 2014 coincides with era of recovering real estate prices following the crash of the Great Recession, which lasted from 2007 to 2009.

The three regions with the sharpest declines in affordability were: 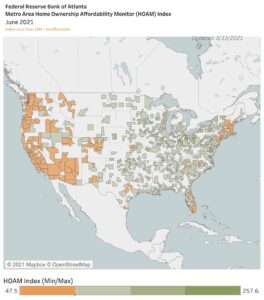 The nation’s least affordable for-sale dwellings are concentrated in the Northeast, West and South Florida. In Georgia, three counties were deemed unaffordable – the consolidated Athens-Clarke, DeKalb and Fulton. (Image via atlantafed.org)

Housing is defined as affordable if no more than 30% of total household income paid monthly to provide shelter, excluding utilities and transportation. The guideline is determined by the U.S. Department of Housing and Urban Development.

To reach its findings, the Center for Housing and Policy at the Federal Reserve Bank of Atlanta conducted its own analysis of information that’s publicly available: 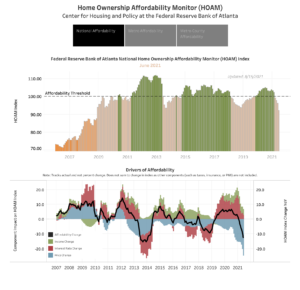 On a national level, the main driver of declining affordability in for-sale residences has been the rising prices of residences, as opposed to interest rates and other costs. (Image via atlantafed.org)

Previous Article
Past fundraisers for Haitian relief causes reluctance in donating after earthquake, Tropical Storm Grace
Next Article
ARC chief explains the transformative goals for his final months on the job