Just ahead of Atlanta runoff election day, three incumbents of the mayor’s office don’t agree on which mayoral candidate is the best one to make sure the city fulfills its promise.

In front of City Hall this morning, Shirley Franklin, who served as mayor for eight years starting in 2002, said she wants Mary Norwood to be the next mayor. 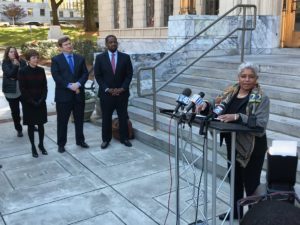 Franklin didn’t endorse in the first round of voting. But in the runoff, she said she feels her involvement is necessary because the city is at a “crossroads” in leadership.

There’s a lot that’s gone right with the city, she said. Her list spans decades, including peaceful integration of schools, MARTA, the BeltLine, universities, the airport, the Olympics, the film and music industries and other things.

But she said not everybody lives in the Atlanta of prosperity and promise.

“We can’t be a city on a hill or the black Mecca when 85 percent … of our African-American children live in high-poverty communities,” said Franklin.

She also returned several times to the federal investigation into pay-for-pay schemes into the city procurement department.

Franklin said this election is about equity, integrity, transparency and issues that affect people. Not race, not religion and not party.

Franklin said Norwood listens, to communities, to business leaders, to people who have complaints. She said that it’s a time for coalitions, that the opportunities Atlanta has are best achieved in coalition, in partnership and not via infighting.

Also asked by a reporter if it was difficult to decide to endorse a white candidate, Franklin said race wasn’t her first consideration.

“Character, transparency and integrity are the first issue for me,” she said.

She said the election is about the future of the city.

Monday’s announcement makes the second mayoral incumbent nod for Norwood. Earlier this month, she also got the endorsement of the Buckhead Coalition and its leader, former mayor Sam Massell. 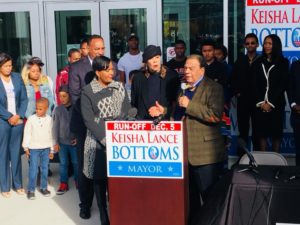 But the day before Thanksgiving, in front of the newly rebuilt and gleaming Martin Luther King Jr. Natatorium, Ambassador Andrew Young, veteran of the civil rights movement and Atlanta mayor for much of the 80s, announced his support for Keisha Lance Bottoms.

Young started his comments with a list of connections between his family and hers: he called Rev. Lawrence Bottoms, grandfather to candidate Bottoms’ husband, one of his mentors. Young said his wife taught with Bottoms’ mother.

“It’s natural that I want to support them,” said Young, pausing, then continuing, “but I basically want to continue what we’ve been doing here in Atlanta.”

Young said that when he came to Atlanta, he found a “social contract” that made the city different from anywhere else.

It was a city, he said, where the business community decided that for them to grow and deal with the “turmoil and troubles” that were affecting other cities, they needed a coalition with the civil rights community.

Years later, Atlanta is doing pretty good, he said. It’s a special place, he said, where that coalition of the civil rights community — be it black, white, brown, straight, gay, Asian, Hispanic — has got to be included in growth, development and culture.

When it doesn’t happen, business breaks down, he said.

“This is a business decision, it’s not a political decision,” said Young, urging a Bottoms vote.

A reporter asked if it’s important that Atlanta have a black mayor, if that’s part of the social contract.

“The social contract is someone,” said Young, “that understands the realities of being poor, or being black, or being gay. Of being outside the circumstances of opportunity, people who need a special push to make it.”

Early voting begins today in various locations and different times in Fulton and DeKalb. The election is Dec. 5.

Previous Article
Previous Post
Next Article
Homeless veteran rates in Atlanta have dropped by 70 percent, but we still have more to do…