In Africa, former Atlantan helps kids One World Futbol at a time

For a couple of weeks in 1996, Sandra Cress helped bring the world of soccer to Atlanta. Today she lives in Nairobi and is helping children around the world live healthier lives through one tough soccer ball that stays round when they kick it. 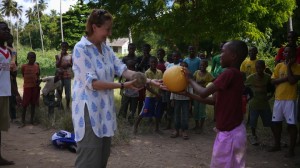 In Zanzibar, Sandra Cress trades a One World Futbol for a rag ball. (Credit: Thomas Moll-Rocek).

The standard soccer balls used across Atlanta suburbs don’t stand a chance in the thorns, glass and barbed wire of the developing world. Like here, children need to play to stay healthy, and children across Africa and Central America and beyond will kick the flattened balls, or they create makeshift balls of rags or whatever they can find. Cress said she saw kids kicking a ball made of old fruit taped together.

The virtually indestructible One World Futbol, made of a hard foam similar to that in Crocs sandals, has already transformed Cress’ world and should inspire anyone who has deep knowledge, contacts and enthusiasm that do not seem to fit in the present job market. The indestructible ball offered Cress an opportunity to come full circle in her passion for soccer and expertise of how different countries work differently in sports and humanitarian aid.

“I love knowing that more poor kids may find success in their lives because they were inspired by play,” says Cress, now the B-corp’s sales director for Africa. “I hope that the simplicity of being able to play, and build friendships and community through play, makes tough communities around the world safer and kinder.” 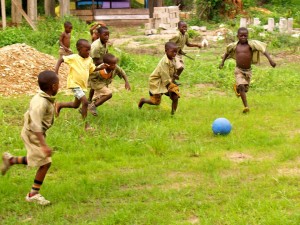 After she left Atlanta to work on soccer events for Nike Sports Entertainment and help South Africa bid for the 2006 World Cup, she became disappointed that the international soccer industry was doing so little to help developing countries. To be the change she wanted to see, she went to Princeton for a masters in public policy and then into international humanitarian work for the Clinton Foundation that ultimately led to this indestructible ball. Creator Tim Jahnigen was inspired after seeing kids playing soccer with a clump of trash tied with twine.

She was so intrigued by the concept of a puncture-proof soccer ball, and its potential to help children become healthier that she joined One World Futbol as a volunteer. Kids who get a chance to play are quicker to heal from trauma and learn rules and responsibility. Teaching life skills and HIV/AIDS prevention, keeping kids in school,  reducing gender-based violence and fostering peace and reconcilliation– messages like these are more likely to sink in through the introduction of soccer.

From dense urban areas to remote villages, she observe how the balls inflated the children’s spirits.  Earlier this year, she delivered 20,000 to Zanzibar, a collection of islands off Tanzania where many children were suffering from malnutrition.

“The children are very, very small compared to American and European children. A 12-year-old looks about 8, and 15-year-old would barely pass for 11 or 12 in the U.S.,” she wrote in her blog. “Stunted growth is … a result of the harsh poverty in Zanzibar.” Their small frames, she adds, didn’t keep the Zanzabari children from playing soccer with abandon.

“We are working with a Belgian non-profit that does psycho-social support for the rehabilitation and reintegration of child soldiers in ten villages in northern Uganda,” Cress says, “When asked what little material support the nonprofit could provide, the chiefs of all ten villages asked if they could possibly get some soccer balls for their villages. These balls really do change the communities wherever they go.”

Like Tom’s Shoes, One World Futbol is marketed globally as a sell-one-give-one-away model. These businesses are among the first wave of benefit corporations, otherwise known as “B Corps,” which under the law must provide a measurable benefit for society as well as for its shareholders. Benefit corporations currently exist in roughly a dozen states, excluding Georgia. Cress found out about it through the Social Venture Network, which has raised capital for companies such as Tom’s of Maine, Seventh Generation, Odwalla, Stonyfield Farm, the Body Shop and Clif Bar. 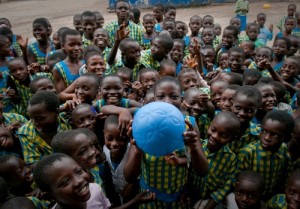 With a goal of higher ball sales and global reach, Cress drew on her Atlanta experience. As soccer competition manager for the Atlanta Committee for the Olympic Games, she recruited staff and volunteers for a 24-team tournament staged in five cities across the Southeast and Mid-Atlantic.

“I learned so much in Atlanta, because we took the organizing committee from a small group of people in 1992 to a Fortune 500-sized organization in four years,” she says. “I’ve been comfortable working in organizations that were under-resourced to start with, and then had to grow very quickly.”

Her journey should inspire anyone who has deep knowledge, contacts and enthusiasm that do not seem to fit in the present job market. Discovering the indestructible ball offered Cress an opportunity to come full circle in her passion for soccer and expertise of how different countries work differently in sports and humanitarian aid.

“Some of the more constructive partnerships we have are with governments in countries that are in post-conflict reconstruction phase, such Liberia, Sierra Leone and Burundi,” she says. “The Clinton Foundation experience gave me an understanding of how different each government in Africa is; what is easy to achieve in one country can be very challenging in another.  Frankly, I think all of my experiences have led me to this place.” 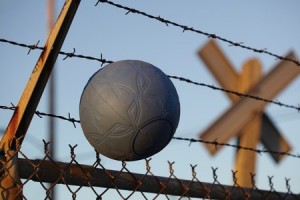 Made of hard foam similar to that of Crocs sandals, the One World Futbol will not deflate from barbed wire and is virtually indestructible. (Credit: Rory Earnshaw)

In 2011, when her husband and former Atlanta Journal-Constitution staff writer Doug Cress took a job running the United Nations Great Apes Survival Partnership in Nairobi, the ball company supported stationing her there to be closer to the groups and kids who need the fortified futbol. The Cresses and their daughter moved there in mid-2011, and expect to be there a few more years.

“We are so lucky that we both are able to do fulfilling work based in Africa, and Nairobi is a really exciting and vibrant city,” she says. “Both Doug and I want to make sure that we never take anything for granted – and that we always face challenges, and never get too comfortable. While we have a lovely situation in Nairobi, I travel in some pretty tough places, and try to get to Kibera or other slums fairly frequently. It’s good to ‘keep it real’ and to remember why we are doing what we are doing.”

Previous Article
Coming of age in a time of war
Next Article
West End and southwest Atlanta: Tweaking Northside Drive could spur growth in areas skipped by last boom