The plan to sell most of Fort McPherson to filmmaker Tyler Perry has a long way to go, much of it behind closed doors, before the deal can close. 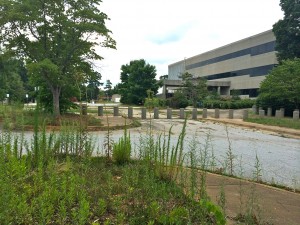 The Forces Command building evidently will be sold to filmmaker Tyler Perry if the Army agrees to sell Fort McPherson to a state authority. Credit: Donita Pendered

“We have a lot of details to get this to home base,” said Felker Ward, who chairs the state authority handling the deal.

The state authority has voted against a motion to update its plans for the fort’s civilian use and to keep the public involved in the process. Ward said these matters already are the authority’s job and the plan updates will be handled by Rick Padgett, who is a seasoned development consultant the authority hired Aug. 7 to help close the deal with the Army by Oct. 15.

The matters to be concluded to the Army’s satisfaction seem to include some if not more than the following: 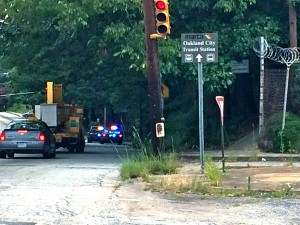 The non-binding deal with Tyler Perry to buy 330 acres of Fort McPherson does not include a section of the base that faces Campbellton Road. Credit: Donita Pendered

The prospect of Tyler Perry building 16 or 17 studios on 330 acres of the 488-acre fort, and triggering more than $1 billion in economic impact, has somewhat overwhelmed this list and other work that needs to be done.

Ward reminded the audience of these details after Perry had left the Aug. 8 meeting at which the tentative deal was announced:

In hiring Padgett, the McPherson Implementing Local Redevelopment Authority has retained a deep well of experience. Padgett was executing complicated ventures involving the government and private sector in an era before they were known as public private partnerships.

Now he works with Walter Huntley, who ran Atlanta’s development arm under then Mayor Andrew Young after serving as chief of staff to then Mayor Maynard Jackson from 1974 to 1982, according to the company’s website.

According to Ward, who spoke before the authority’s board voted Aug. 8 to reject the motion by member Ayesha Khanna for a renewed commitment to planning and community engagement: