Fort McPherson: No talk yet of whether HUD’s existing approval would allow for Tyler Perry’s studio

The state authority overseeing the conversion of the shuttered Fort McPherson military base into a civilian use met behind closed doors for two hours Thursday before emerging to say a final deal could be secured in two to three weeks. 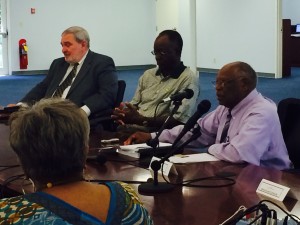 Felker Ward (right), who chairs the McPherson Implementing Local Redevelopment Authority, predicts a deal could be negotiated by the end of July. Credit: Donita Pendered

“We are in the process of negotiating, at this time, a possible sale,” said authority Chairman Felker Ward. “We hope to be able to conclude those negotiations in the next two to three weeks.”

One issue yet to be discussed in public is how the proposal brought by Atlanta Mayor Kasim Reed to sell most of the fort to filmmaker Tyler Perry will affect the existing approval by HUD of a plan to retool the fort into a science center.

The Base Closure Community Redevelopment and Homeless Assistance Act of 1994, as amended in 1996, spells out the role of the federal Department of Housing and Urban Development in reusing military bases.

One oversight HUD provides during base closures is to ensure that surplus federal property be used to provide housing for the homeless. According to HUD, the Redevelopment Act was: “designed to accommodate the impacted communities’ multiple interests in base reuse and to meet the national priority to assist homeless individuals and families.”

HUD issued a favorable determination in September 2011 for the authority’s plan to develop Fort McPherson into a mixed-use development that would provide:

Gov. Nathan Deal and the Legislature have put state money behind this plan.

Georgia provided $28.4 million to purchase and retrofit the Forces Command building into a state research facility. The money was made available in the fiscal year that began July 1, 2013. The money has not been made available through a bond sale while the fort remains in the possession of the federal government.

Incidentally, Reed does not serve on the McPherson Implementing Local Redevelopment Authority. One of his chief advisors, Tom Weyandt, was appointed to the authority in 2013 by the governor. 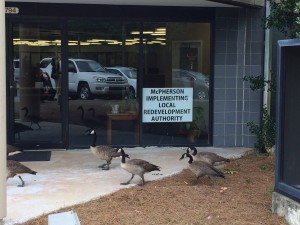 The authority’s members are appointed by the governor from a list of nominees provided by Atlanta, Fulton County, and East Point, according to a law the Legislature passed and then Gov. Sonny Perdue signed in 2010.

At its meeting Thursday, no one on the authority mentioned Perry by name. The only identification was negotiations with a “buyer.”

During the public comment session, a few in the sparse audience stepped forward to express concerns that Reed’s proposal is moving swiftly and without input from the neighborhood.

The redevelopment plan approved by the authority in 2007 did not have full community support, but it was adopted after a certain level of community input.

“We would like the board to be a little more transparent,” Ernestine Faircloth said after the authority reconvened after its two-hour executive session.

“When you come out, you still don’t tell us anything,” Faircloth said. “If you’re not going to be transparent, please don’t forget the community.”

Atlanta City Councilperson Joyce Sheperd responded to the comments. Sheperd said that government land transactions are required by law to be conducted in private. Sheperd said residents can rest assured that she is voicing their concerns behind the closed doors.

“Every time you all come, I hear everything you say,” Sheperd said. “Just know that when I’m in the meeting as a councilperson, it’s very clear to me what you all are expecting. And when it’s open, we hopefully can talk about it and you will se that it is part of what is being discussed.”

Previous Article
Movie Review: Humanity in the ‘Dawn of the Planet of the Apes’
Next Article
Struggles remain as we celebrate 50 years after passing Civil Rights Act