Will Shirley Franklin help with the conversion of Fort McPherson to civilian use?

That was the question posed by a handful of hopeful community leaders right after a development team was selected Tuesday by unanimous vote of the state authority overseeing the fort’s conversion. The team is comprised of two Atlanta-based companies, Cousins Properties and Integral Group, and is being led by Cleveland-based Forest City. 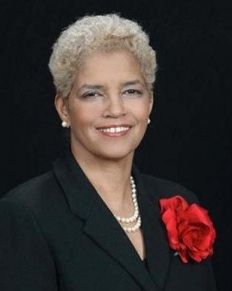 Franklin does have a record of coordinating the community engagement aspect of major developments. She honed those skills while creating the participation programs for women and minorities as a senior policy advisor with the Atlanta Committee for the 1996 Olympic Games.

And a key concern of engaged community leaders is that they have meaningful involvement in the actual planning and implementation of projects at the fort.

But the former Atlanta mayor said she doesn’t expect to be involved at Fort McPherson.

“That’s not likely to happen,” Franklin said, though she added that she would be willing to attend a meeting or two to offer her thoughts.

Franklin’s full schedule includes her work as president and board chair of the non-profit Purpose Built Communities, which was created by Tom Cousins, the founder of Cousins Properties, and investor Warren Buffett. Purpose Built works on holistic community revitalization, a task that Franklin said is distinct from the redevelopment of a shuttered Army base.

Jack Sprott, executive director of the state authority overseeing Fort McPherson, said after the meeting that community leaders will be involved in the planning process.

“That’s the right thing to do,” Sprott said.

But the nuts and bolts of how community engagement in the final planning process will actually happen is a question that’s yet to be answered.

The real work of redeveloping 113 acres is about to start, as the state authority and the joint venture create a master development agreement.

This agreement will be the foundation of converting the fort to uses that include homes, shops and offices. Gov. Nathan Deal has recommended the state spend about $28.4 million to buy the Reserved Command Building for use as state office space, and to plan for the conversion of the FORSCOM building to the planned Global Institute of Health.

Sprott outlined a possible timeline for future events, now that the authority has named a master developer, as the Army had requested:

Glenda Knight, a co-chair of the McPherson Action Community Coalition, said she wants the master development plan to include an interim plan for access to the fort.

The issue is to allow businesses to begin opening in some of the existing buildings, she said. Knight wants local businesses to have the same sort of access that the state authority intends to get for it’s office space. There’s no need to wait for the large-scale redevelopment to be complete before such access is provided, Knight said.