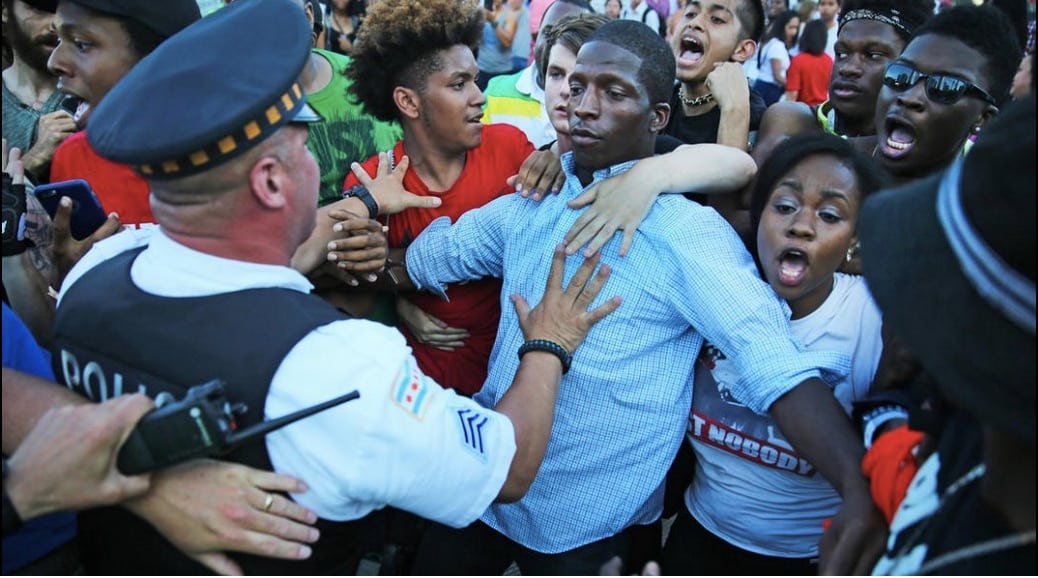 A couple of weeks ago, before everything else hit the fan, police were called to a domestic incident at a home in Katy, Tex.

By the time they got to the scene, 42-year-old Christy Sheats had opened fire on her daughters Madison, 17, and Taylor, 22, gone back inside to reload the pistol she’d inherited from her beloved grandfather when they fled, wounded, from their house, and returned to stand over their bodies and finish them off. When Sheats refused to drop her weapon and moved toward the police, an officer — showing much greater efficiency with his ammunition than others last week — killed her with one shot.

“If we shoot someone, that’s the only way we shoot. We shoot to end the threat,” said Maj. Chad Norvell of the Fort Bend County Sheriff’s Office.

Why start with this, when all the big stories of last week touched so directly on the deep subject of race in America, and Christy Sheats was a suburban white woman who put up gushing posts about how much she loved her daughters and worried that anti-gun Democrats might take away “my ability to protect myself or my family?” Why start with the moment a bullet ended her life, when the shootings by police in Baton Rouge and St. Paul are so much more troubling?

Because all these cases rest on the question of when, under our laws, police are justified in using deadly force. By comparison with the horribly botched shootings of Alton Sterling and Philando Castile, the shooting of Christy Sheats was an exemplary example of the principle, rooted in English common law, which the Texas sheriff’s officer summed up so succinctly.

But only by looking hard at both the justified and unjustified use of deadly force can we begin to wonder how it is that we get to that point in the first place, why it seems to be happening more frequently, and what better ways there might be of resolving such conflicts.

In short, it may be time to begin thinking small.

America has gotten gunned up, and we are not only speaking here of worried law-abiding citizens, petty criminals, panty-sniffing psychopaths, street peddlers and severely disturbed suburbanites.

My former colleague Ron Martz, a staunch Second Amendment supporter, recently wrote about a revealing report by a watchdog group on how much agencies of the federal government, including those with no law enforcement function such as the Social Security Administration and the Railroad Retirement Board, spend on guns, ammunition and military-style equipment. In all, the spending amounted to $1.48 billion over the years 2006-2014.

Add to this the very substantial amounts state and local governments spend on guns, and it is no wonder so many situations arrive at the fatal point of gun-vs.-gun, and the ancient rule of deadly force kicks in. It is frequently the only resolution for which we have all equipped ourselves.

What if a fraction of this money could be spent devising ways to neutralize the effectiveness of guns? There has been much hand-wringing over the decision by the Dallas police to use a robot to kill Micah Johnson with an explosive device. Perhaps our time would be better spent figuring out better ways to use the robot.

If robots can carry bombs, they can carry cameras, or devices designed to immobilize without killing. We could become a lot more creative about such matters, if we set our minds to it. We could only be creating some scary new threat to our existence, but the alternative is to continue blasting away at each other with a technology that hearkens back centuries.

Law enforcement has already been dramatically affected by one disruptive technology, the cell phone camera. The industry which has raked in all those billions from the government and its citizens could use a dose of disruption, too. Attempts to develop some type of “smart gun”  have been heatedly resisted by gun groups., but this doesn’t preclude the development of gadgets designed to in one way or another neutralize the effect of guns. If technology can militarize law enforcement, it might also be able to civilianize it as well.

If this seems impossibly blue-sky, consider that we are closer than anyone would have dreamed a few years ago to driverless cars. Innovations like the taser have been a disappointment, but technology fails until it busts things wide open. Besides, every dollar spent on technological innovation is a dollar not spent on guns.

There should also, of course, be far more rigorous training of police officers to enable them to deal with flashpoint situations, and a continuing, searching conversation about race. Perhaps there should even be some discussion of whether an attempted suicide (Sheats had three) should be grounds for taking someone’s guns.

But amid the endless chicken-and-eggery of American public discourse, more disruptive technologies, practically applied, might not be a bad thing at all.