Not since Nicole Kidman in “The Hours” has a nose so totally defined a performance.

As zillionaire John du Pont in “Foxcatcher,” Steve Carell is initially unrecognizable. His false beak seems to unbalance his entire head, which tilts backwards so as to make the notion of “looking down your nose at someone” a physical reality.

The film is based on a true story — an arcane bit of Americana about a very, very rich man with delusions of grandeur. Or maybe just delusions. Ensconced in his huge estate in the rolling hills of Pennsylvania, du Pont seems without any human contact — unless you count the servants and his querulous mother (Vanessa Redgrave, on-screen less than five minutes and still brilliant). 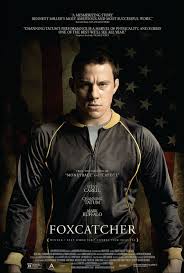 Mater clearly cares more about her horses than her son. Her passion is reflected in the foxhunting memorabilia and horse-show silver cups on prominent display. The family spread is even named Foxcatcher (hence the movie’s title.)

So Mom has her stable; John will have his. But instead of equines, he collects Olympic-level wrestlers. His pride and joy is Mark Schultz (Channing Tatum), who has his own family issues— most notably, a love-hate relationship with his brother Dave (Mark Ruffalo), also a world-class wrestler.

Du Pont plays at coaching wrestlers much the way Marie Antoinette and her court played at being shepherdesses. Add a touch of du Pont’s loony nationalism  — “My friends call me Golden Eagle” he says and you wonder, what friends? —  and you have the makings of a weirdly comic American tragedy.

But that’s all you have. Director Bennett Miller (“Capote,” “Moneyball”) does nothing to develop the increasingly complex relationships.

So, while the movie successfully negotiates the hour-in turn from silly to sickening, ultimately grinds to a halt. Oscar-impressive as he is, Carell is coloring in a character sketch that can’t really go anywhere. What else can he do? Stab Janet Leigh to death in a shower?

Meanwhile, Tatum isn’t doing much of anything, aside from flexing his muscles and trying to keep his eyes open (he’s the squintiest-eyed actor this side of Clint Eastwood).

Ruffalo is the only one who manages to bring the film to life. However, he’s hobbled by a script that makes him a supporting character when, in fact, he’s very much central to the story. Hopefully that means he’ll nab a supporting Oscar nomination; he certainly deserves one.