A free app from researchers at Georgia Tech is the latest step toward providing transit passengers with the integrated information they need to know about the region’s public transit systems. 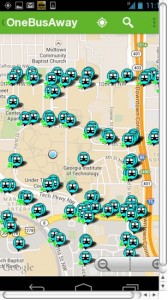 The app now provides arrival time for MARTA trains. It previously had provided arrival times for MARTA buses and Georgia Tech’s shuttles. Over time, developers plan to add arrival data for other transit systems in the Atlanta area.

The OneBusAway app functions on all mobile devices, computers, and large screens such as those provided in public places, developers said. The app is available for free download at http://atlanta.onebusaway.org/.

“For bus and shuttle stops where there is no sign for next arrivals this app is the rider’s only source of information,” app co-founder Kari Watkins said in a statement Tech released Wednesday.

The app is one result of Watkins’ interest multi-modal transit planning and the use of technology to improve information available to passengers. Watkins worked on the app while at the University of Washington, in Seattle. Other versions serve riders in Seattle and Tampa.

The app recognizes the user’s location and provides information gathered through the GPS units installed on transit vehicles. MARTA recently made its GPS information available to the public for the purpose of enabling developers to create programs that enhance the passenger experience.

MARTA already provides a tracking app for its buses and trains, in addition to apps that provide other types of information. MARTA GM Keith Parker said he views Tech’s app as complimentary to MARTA’s efforts build its ridership by providing useful information.

“One of our priorities is improving the overall customer experience through the use of technology,” Parker said in the statement released by Tech. “That’s why we launched the On-the-Go mobile app providing real-time train and bus arrivals. We’re also excited to work with OneBusAway, and the metro Atlanta tech community, in developing solutions that will help retain and attract transit riders.” 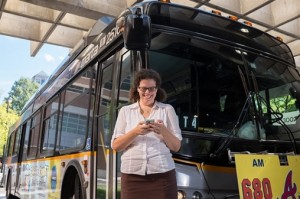 The arrival time of MARTA trains, as well as buses, is now available through an app co-founded by Georgia Tech researcher Kari Watkins. Credit: Georgia Tech

The idea behind Watkins’ research is to promote transit ridership. Research conducted in Seattle and Tampa has shown that the app’s users have a more positive outlook on transit because they have a better idea of when their vehicle will arrive.

Starting in April, Watkins and a colleague in Tech’s Urban Transportation Information Lab plan to start a study on the effect of real-time transit information on ridership in Atlanta and New York City.

The project has financial support from the National Center for Transportation Systems Productivity and Management, and the U.S. Department of Transportation.

The expanded capability of the Tech app arrives as state lawmakers consider ways to make it easier for passengers to travel on public transit.

The Senate has passed a resolution calling on GRTA to build a website that provides the schedules and ticket prices for the four major transit systems in metro Atlanta – GRTA, MARTA, Cobb Community Transit and Gwinnett County Transit. The resolution is not binding and provides GRTA with no funding to accomplish the task. The measure is pending in the House.

GRTA officials have said they will do their best to provide the service. It may not be complete in time to meet the deadline set in the resolution, which is July 1.