Can a film be both mercurial and melancholy?

I wouldn’t have thought so until I saw “French Exit” – a whimsical yet downbeat movie about aging, loneliness and how to go out in style.

Frances (Michelle Pfeiffer) is a legendary Manhattan socialite at the end of her rope. Or rather, her funds. The death of her wealthy husband some years back has had little day-to-day effect on her. Until it does. The funds, her lawyer tells her, are about to run out. Does she have a back-up plan?

“My plan,” she says smoothly, “was to die before the money ran out.” 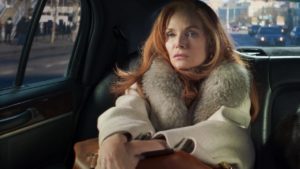 Luckily, she’s the sort who has a friend, Joan (Susan Coyne), with an unoccupied apartment in Paris. Luckier still, she has a son, Malcolm (Lucas Hedges), whom she hardly knows but that doesn’t stop her from plucking him out of Manhattan and persuading him to put his engagement on hold. After all, she can’t just swan into the City of Lights on her own.

Actually, given her icy entitled manner, she probably could. But her boy is presentable, kind and, in his way, protective. And he can’t be all that broken up about his left-behind fiancée (Imogen Poots). On the transatlantic crossing – a plane just wouldn’t do – he has a one-night stand with the ship’s resident psychic who casually reveals that two passengers typically pass away on each voyage; she can even show them where they keep the bodies.

That’s the sort of movie “French Exit” is – eccentric, mordant and somehow funny when you least expect it. Frances, Malcolm and her black cat, Small Frank (named, of course, after her deceased husband, Frank), settle into Paris without much ado. It’s almost as if the city, with its “Old World” snobbishness and elegant insouciance, was waiting for her. 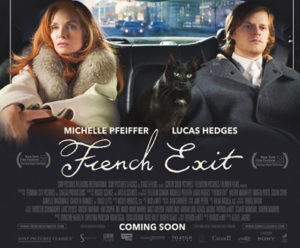 Slowly, almost inevitably, Frances and Malcolm gather an entourage – a surrogate family of sorts who somehow all end up in and out of the borrowed apartment. There’s Joan, who decides to check on her friend (and her property), the aforementioned psychic, a private investigator, the former fiancée and her new squeeze, and a gentle oi9iuost friend.

Pfeiffer is so flat-out marvelous here you almost wish she’d been just the tiniest bit less gorgeous in her prime, so we could’ve seen more of her and less of her as arm-candy for famous actors. Not that she looks less than spectacular, but for once, the focus is on her, with her looks and charisma as givens, as tools she uses to shape her character, not to reflect someone else’s.

At one point, Frances admits to Joan she knows she’s a cliché. But, she adds, that’s fine with her because it also means she’s timeless.

As is, in her own un-clichéd way, Michelle Pfeiffer.