From poverty to plenty: Atlanta could be a case study in reducing blight

Two events Wednesday cast outlooks on poverty in metro Atlanta and a path that could lead one poor area toward prosperity. 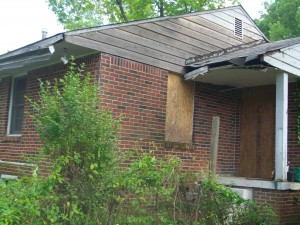 Vacant and boarded up housing, such as this one near Washington Park, is a sign of blight that’s related to intergenerational poverty. Credit: David Pendered

A Harvard University professor confirmed a shocking report released earlier this year – social conditions in metro Atlanta are such that it is the worst major urban region in the country in terms of children born into poverty moving into the middle or upper economic classes.

At another event, Georgia Tech students outlined their ideas for revitalizing two poor neighborhoods near the Falcons stadium. Some recommendations address the very problems named in the Harvard study that are associated with intergenerational poverty.

Nathaniel Hendren addressed the quarterly Atlanta Regional Housing Forum. Hendren is an assistant professor of economics at Harvard who just last year earned his doctorate in economics from MIT, the Massachusetts Institute of Technology. Hendren worked with three associates at Harvard and University of California, Berkeley to produce in July “The Equality of Opportunity Project.”

Results showed Atlanta ranked 50th out of 50 cities in terms of children from the bottom fifth income bracket to the top fifth income bracket. Among the nation’s top 100 cities, only Memphis had a lower percentage of mobility than Atlanta. Hendren defined metro Atlanta as the five-county core of the region. 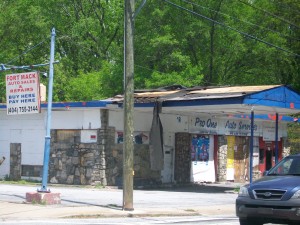 Employment opportunities are limited in areas where businesses are shuttered, such as this store near Fort McPherson. Credit: David Pendered

Hendren emphasized that he cannot address policy issues that could remove roadblocks to success. However, he said, the research has identified the roadblocks to social mobility. The study found five correlations between intergenerational mobility and income inequality:

In a break from the forum’s tradition, there was no panel discussion following the keynote speaker. Instead, the entire audience became a panel guided by moderator Bill Bolling, of the Atlanta Community Food Bank.

Harriet Macklin, a veteran of affordable housing, made the first comment and said a plantation mentality in Georgia perpetuates poverty in black communities. Bolling asked Macklin to elaborate, and she said the situation is greater in rural areas than in metro Atlanta.

“Politics keep the black folks down,” Macklin said. “That’s as plain as I can say it.” 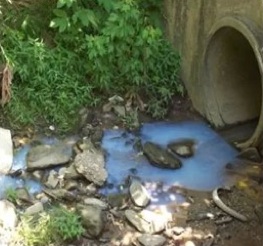 A new report from Georgia Tech says this method of handling storm water runoff could be replaced with a network of parks, as has been done in other parts of Atlanta. Credit: Georgia Tech

Hendren didn’t respond to Macklin’s observation. Later, someone else in the audience noted that a similar point was made at the September meeting by Milton Little, head of the United Way of Greater Atlanta. Little had said a civic leader had told him: “Until we are willing to have a conversation about how much race and class influence these decisions, we’re going to spin our wheels.”

Bruce Gunter, another veteran of affordable housing and who is working with the Georgia Tech students, framed the issue in terms of Atlanta’s history of zoning and public investments. Gunter said that Atlanta in 1922 had zoned two districts as the only places where blacks could reside and where whites could not reside; and that construction of public venues such as the civic center and stadiums had further isolated these communities.

Hendren responded that he is not an economic historian, who may interpret that set of facts as an extension of slavery patterns. “That suggests that some of these things go very deep into the history of the country,” Hendren said. Then he offered an optimistic thought:

“If we take a different path, we can improve these things.”

The Georgia Tech report offers a different path for the Vine City and English Avenue neighborhoods.

At a presentation to the community on Wednesday, students offered clear recommendations on the reunification of Vine City and English Avenue with the rest of downtown – as was the case before construction of the Georgia Dome and Georgia World Congress Center separated the areas.

Vine City and English Avenue could benefit from parks that handle storm water, such as the Historic Fourth Ward Park. File/Credit: Donita Pendered

The report focused on four issues (which will be addressed in a future story in SaportaReport):

The students emphasized two points about their report.

The main recommendation is to reduce the communities’ isolation from downtown Atlanta. The report’s headline is: “Break down that wall,” which was created by the construction of the Georgia Dome and its parking lots and exacerbated a divide that was initiated by construction of the GWCC, which is one of the nation’s largest convention facilities.

The students’ second point was the name of the research effort: “Connectivity Studio.” The purpose of the fall studio was to devise recommendations that would reunite downtown at a time more than $2 billion in construction is on the table – $1.2 billion at the Falcons stadium, and $1 billion for the new mini city and transportation hub that’s to be built atop and around the old railroad gulch.

A dozen students worked under the guidance of Gunter and Mike Dobbins, a former Atlanta planning commissioner. The current report continues work done by a studio Dobbins conducted previously that examined the redevelopment of Northside Drive.