College radio is one of the cultural icons that made me fall in love with Atlanta bad enough to move here. The student-run broadcasts of Georgia State’s WRAS (aka “Album 88”) and Georgia Tech’s WREK were among the ways Atlanta, unlike most every other major city, had not yet been corporatized, homogenized and franchised into clone-hood. So I spent my first weeks in ATL, like thousands did for decades before me, driving around listening to music I’d never heard anywhere else.

Mere months later in 2014, Georgia Public Broadcasting staged an infamous surprise takeover of WRAS and replaced its daytime programming largely with an NPR feed already available on WABE. (Since, as a local indie musician I once heard on WREK put it, “Competition makes everything the same.”) A “#SaveWRAS” protest movement erupted from students and alumni, with much of their outraged commentary constituting an ad hoc oral history of the station’s significance.

From that, I learned that WRAS wasn’t just where you, the pimple-faced innocent or Yankee transplant, first heard some local band; it was the first place the world heard them in a time when Album 88 and its national publicity connections could help turn musicians into legends. R.E.M., Outkast and the B-52s are among those who got crucial early airplay on WRAS.

Today, there are entire books about those groups and how they defined Atlanta, Georgia and the South. But there has been no comparable history of WRAS. The station’s 50th anniversary passed in January with virtually no notice, partly due to still-raw feelings about the takeover, but also because of that lack of an official chronicle.

A step toward changing that is a new master’s thesis by a TV journalist turned GSU history student named Andreas Preuss. “Left of the Dial, Right on the Music: 50 Years of Georgia State FM Radio” follows WRAS’s rise and decline as a music powerhouse, its internal struggles with diversity, and the tensions with its natural predators: commercial and public stations. And it puts the GSU station in the context of others around the country, most of which also lack written histories.

“The campus station speaks to the larger picture of American college radio impact and experience as a unique yet under-studied field,” Preuss writes in the introduction.

Unique circumstances took Preuss from CNN to working the WRAS booth, where decades worth of DJ notes on the old vinyl records got him thinking historically. “I was surrounded by tens of thousands of records that really nobody plays anymore,” he recalled in a recent interview. “Just holding these records, … the B-52s or R.E.M. or U2, these iconic college radio bands — nobody ever would have heard of them if it hadn’t been for college radio.” 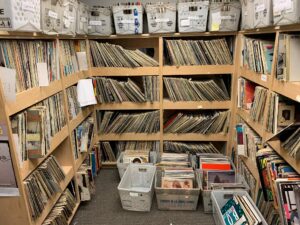 Some of the vinyl records in the WRAS archives that helped to trigger Preuss’s history-documenting instincts. (Special: Andreas Preuss)

Preuss is a history-minded sort who hails from New Orleans and, with wife Nonnie, owns what may be the oldest original house in Buckhead. He’s also a fan of once-underground genres like heavy metal, post-punk and industrial and worked at Tulane’s college radio in the 1980s.

A semi-retired TV news producer, Preuss started his career in radio before eventually spending 25 years at CNN. That job brought him to Atlanta in 1996, where he, too, fell in love with WRAS and had idle dreams of working there. “I knew it was such a cool place,” he said.

In 2019, Preuss took a buyout from CNN. He was already slowly working on a master’s in history at GSU due to a CNN benefit that helped pay for a degree that could be of use to journalism. His original thesis focus was the Berlin Wall and the Cold War. The buyout meant he suddenly could attend full-time — and fulfill his dream of working at WRAS, where he put his journalism skills to work hosting a news-oriented interview show called “88 Affairs.”

This big chance came in the midst of the pandemic shutdown, with the station mostly empty. But it still had its old-school romance. “All college radio stations look the same — vinyl stickers everywhere, used pizza boxes …” — and most of all the “smell of old paper” on the records. Preuss changed the focus of his research to WRAS itself and used “88 Affairs” to interview those involved in it.

Other sources included an active alumni group, boxes of materials in the university archives, and interviews with such musicians as Mike Mills of R.E.M. and David Lowrey of Camper Van Beethoven.

He traces the story of GSU radio back to the 1960s, when a commercial station allowed students to have airtime. The school’s own WRAS — the call sign stands for “We’re Radio At State” — started broadcasting Jan. 18, 1971 at 88.5 FM with a format of Top 40, plus news and sports.

In 1987, WRAS moved into the big leagues with a 100,000-watt tower capable of broadcasting as far as Alabama. By the 1990s, it was a major player in what Preuss calls a “college music industry” that launched alternative rock and other genres into mainstream charts. WRAS even issued its own compilation albums and a magazine before the internet brought a decline.

WRAS played pioneering genres that commercial stations wouldn’t air, including punk, rap and electronica. Preuss says that “there might not have been an R.E.M., at least that everyone would know,” if it wasn’t for WRAS’s airplay and the music director’s behind-the-scenes connections with the record industry.

“Our interaction with college radio was massive,” Mills, the R.E.M. bassist, says in the thesis. “We were contemporaries in our initial years in the beginning and really the rise of college radio. It was a mutually beneficial agreement.”

David Bowie and Alice Cooper were among the luminaries who visited the station. WRAS played a key role in the Boomtown Rats’ 1979 New Wave hit “I Don’t Like Mondays”; singer Bob Geldof and keyboardist Johnnie Fingers learned of the school shooting that inspired the song when it came over a teletype machine during their visit to the radio studio.

Those underground genres were often championed by student DJs who were outcasts or members of minority groups. The station didn’t have its first women and African American managers until the 1990s. Preuss documents a series of internal tensions, from racist comments to an intern in the 1990s to a 1979 incident where the general manager “banned and even destroyed albums” in an attempt to keep punk rock off the air.

The biggest tensions, however, were from the outside, as other stations circled WRAS, looking for opportunities to get a taste of the success of what in some ways was a big business run by young people still learning the ropes.

Another legendary Atlanta station, 99X, became so in the 1990s with an alternative format that Preuss says was largely copied from WRAS. He quotes a WRAS staffer who also interned for 99X as being quizzed by that station on whether to play the likes of then avant-garde material like R.E.M.

But the true threat was always GPB, whose repeated takeover attempts dated back to 1983, when WRAS filed a permit for the 100,000-watt upgrade. When it finally happened, it was a secret deal done without student knowledge or input. Preuss says that still stings, especially for alumni who ran the station in its glory days and joined the failed protests. (Full disclosure: I was involved in the “#SaveWRAS” protests to the extent of many snarky tweets and a bumper sticker that lasted longer than my car.) 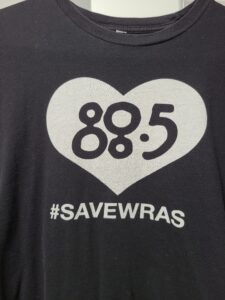 “This was the best time of their lives,” he said. “They were hanging out with R.E.M. They were going to shows. They were kings and queens of Atlanta.”

And Preuss says that for “88 Affairs,” he had to push to get comment about the 50th anniversary from recently departed GSU President Mark Becker, who oversaw the takeover. The anniversary passed quietly, with maybe the biggest attention being an Atlanta Press Club panel discussion that included Preuss.

Preuss didn’t join the “#SaveWRAS” protests. As a journalist who’s seen many stations get bought out and who worked with GPB CEO Teya Ryan when she was at CNN, where she later ran Headline News, he is sanguine about the takeover. “I thought it was sad, but you know, I’m a media professional myself,” he said. “… “Teya Ryan, God bless her, she’s a shark. I worked with her at CNN. That’s what she does.”

He says WRAS listenership was on the decline and that much of the protest was based on nostalgia, with many participants likely having gone years without tuning in. He says he thinks he may have helped some still-upset alumni with his perspective that, from the cold business perspective, the station was “another piece of meat, a very expensive piece of filet mignon.”

The future of student radio

But that’s not to say that Preuss is laid-back about the future. He notes that NPR affiliates “gobbling up” college radio stations is a national trend that bears study of its own. College radio deserves more chronicling, he says, and maybe his thesis will become a book. In that thesis, he explicitly warns against further GPB programming takeover. He said his creation of “88 Affairs” was in part an attempt to boost listenership in the event that GSU and GPB made a move during the pandemic lockdown struggles.

GSU and GPB both tell me they have no plans to further reduce student broadcasting — at least for now.

“WRAS plays an important role in the life of our university and the community through the numerous educational and co-curricular opportunities it affords our students,” said Michael L. Sanseviro, GSU’s vice president for student engagement, in an email. “The GPB partnership has enhanced our ability to serve our students in myriad ways, including internship and career opportunities, and the ability to work on multiple channels of content. There are no plans to alter the existing relationship in the foreseeable future.”

GPB’s Ryan, in a written statement issued through a spokesperson, noted that GPB’s current WRAS programming is in the daytime slot and includes both NPR as well as GPB news and original shows like “Political Rewind.”

“Just as we do across the state, we’re proud to serve listeners in the Atlanta area with balanced, reliable information and insightful conversations about issues going on throughout the state and the world,” Ryan wrote. “Currently, there are no plans to extend programming hours or administration of WRAS. Instead, we’re focused on developing and providing the highest quality content for listeners as a trusted public media source.”

Student broadcasting still remains at WRAS on FM in the nighttime and 24/7 on an HD radio channel that can also be streamed online. Since the takeover, I’ve certainly still had the pleasure of discovering a band — say, the Zig Zags — through WRAS.

The concluding point of Preuss’s thesis is to make sure that cultural tradition doesn’t become history. “As radio programming becomes more generic, the need for these unique voices must be preserved and protected,” he writes. “… There’s often magic in the human curation of music. As the saying goes, just bear through the weird stuff and you might hear a song that will change your life.”

Correction: A previous version of this story conflated the years that WRAS filed and activated its 100,000 antenna, which were in 1983 and 1987, respectively. This story has been changed to clarify that Preuss worked at CNN at a different time than when Teya Ryan managed the Headline News programming.