Fulton County and Keep Atlanta Beautiful are partnering to update the water feature at the front the Fulton County Government Center, an attraction that factored into the political rise of Republicans in suburban Atlanta 25 years ago.

Plans call for a full renovation of the water garden, and the adjoining streetscape, on the Pryor Street side of the building. Pryor Street runs between the government center and Fulton County’s Lewis R. Slayton Courthouse.

The total price tag of $3.4 million is to provide:

Currently, the government center can be a challenge to enter for folks who have no disability, as well as for those who do rely on walkers, wheelchairs or other devices. 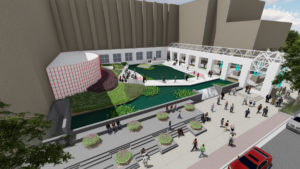 Fulton County and Keep Atlanta Beautiful are partnering on a $3.4 million renovation of the water garden, and the adjoining streetscape, on the Pryor Street side of the Fulton County Government Center. Credit: fultoncountyga.gov

A number of steps on a sloping surface separate the main entrance from the main sidewalk. A number of these steps stretch part way across the entrance area, sometimes impeding access for those without full mobility.

“It is important to me that Fulton County create our water garden into a more inviting public space that will make Fulton County and the government district more welcoming to visitors and residents,” Fulton County Commissioner Joan Garner, who represents the area, said in a statement. “I am glad to be part of the energy and excitement that defines downtown Atlanta.”

The renovation work outside the county government center will bask in the light of Atlanta’s back-to-the-city movement.

Just a block to the north, the city appears to be taking the final steps to close a deal with a developer who intends to remake Underground Atlanta. WRS, Inc. has announced plans to add apartments and a grocery story to the struggling retail/entertainment complex. WRS estimated its investment will be in the range of $150 million to $200 million.

At a distance to the southeast, Turner Field and its 70-acre site is to be redeveloped into a complex of apartments, shops and sports facilities. The $300 million project is to be led by a partnership that includes Carter and Georgia State University.

From the day it opened, opulent government center came under fire from Republicans in north Fulton County. They cited the center, the water garden, and the indoor botanical garden that included palm trees priced at $8,500 each, as an example of a Democrat-led government run amok.

Then state House Representative Mitch Skandalakis, a Republican, helped lead the movement against this type of government spending. Skandalakis and others talked about recalling then Fulton County Chairman Michael Lomax.

Lomax ran in 1993 for Atlanta mayor, a campaign he lost to Bill Campbell. Skandalakis defeated Martin Luther King III in the 1993 special election to replace Lomax. Skandalakis won the 1994 campaign to a full four-year term, opening the door to countywide Republican elected leadership.

Meanwhile, a similar tax revolt was being led by north Fulton resident Mark Burkhalter, who would go on to win nine elections to the state House, a total of 18 years. Burkhalter ultimately serve a short time as House Speaker.

Burkhalter helped lead the “Lower Our Grady Tax” revolt against Grady Health System. At the time, Fulton County taxpayers were paying more than $70 million a year to help provide indigent care at the state’s largest public hospital. At the time, the money was characterized as “the Grady payment.”

In the current budget for Fiscal Year 2016, Fulton taxpayers are providing $60.2 million and the money is characterized in the budget as, “the Grady Hospital Transfer.”

Since the days when critics dubbed the government center as Fulton’s, “Taj Majal,” “Xanadu,” and “Crystal Palace,” north Fulton political leaders have succeeded in creating municipal governments that cover all the land north of the city of Atlanta. The cities of Alpharetta, Mountain Park and Roswell have been joined by Sandy Springs, Milton, and Johns Creek.