The proposed privatization of Gwinnett County’s airport is a local matter in which the state won’t intervene, according to the state official who oversees aviation for the state Department of Transportation.

Gwinnett residents and leaders have wrestled for years with the question of what to do with Briscoe Field, located along Ga. 316 about two miles northeast of Lawrenceville. At the heart of the issue is a debate over whether to allow commercial passenger service – and the impact that would have on neighborhoods near the airport. 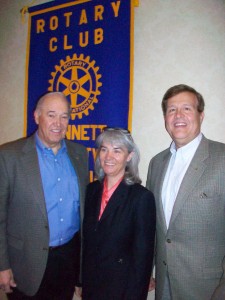 Speaking Tuesday to the Rotary Club of Gwinnett County, Carol Comer said the state has no role in deciding or recommending the future of the airport. Comer directs GDOT’s Intermodal Division, which oversees systems including aviation, transit, rail, ports and waterways.

The future of Briscoe Field was uppermost on the minds of some in the audience. Before Comer spoke, the expectation among some was that Comer would outline the state’s position on Briscoe Field.

Just this month, only one firm submitted a proposal to the county’s request for privatizing the management of the airport. But that firm, Propeller Investments, has said previously that the deal made sense only if it could eventually establish commercial air service, according to a Feb. 9 report on WABE-FM.

Briscoe came in behind Dobbins Air Reserve Base, in Cobb County, but had fewer problems relating to air traffic control. Briscoe was more expensive to convert to commercial use — $2.2 billion as opposed to $1.4 billion at Dobbins, according to the Hartsfield study.

During Comer’s dialogue with the lunch crowd, the first question asked was whether GDOT had taken a position on the current proposal to privatize the airport.

“We’ve not taken a position,” Comer responded. “That’s not exactly what we’re charged to do. We are to provide assistance to the county, and provide information about the FAA’s privatization program.

“Privatization is a county issue,” Comer said. “It’s not an issue for us at the Department of Transportation.”

But economic impact is an issue for GDOT. And during her presentation Comer provided figures that show Briscoe Field ranks second in the state, in terms of economic impact, among the state’s public airports, excluding Hartsfield-Jackson Atlanta International Airport.