According to Mayor Kasim Reed’s current budget proposal, the picture isn’t any better in Atlanta. The effect of the downturn rambles across major sectors of the city’s economy that once had prospered from real estate development – engineering and construction, materials and transport, legal and marketing and sales.

The mayor’s budget book holds out little hope for a bounce in the local economy to occur over the next year.

One section in the mayor’s book states:

“Factors that will restrain Atlanta’s overall growth include the ongoing recession in nonresidential construction, festering problems in the banking sector, and the effects of the massive restructuring of homebuilding and allied industries. 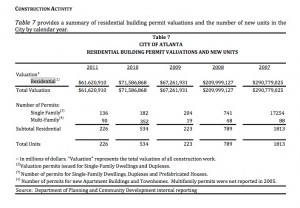 Construction of houses and duplexes has plummeted over the past five years. Credit: Mayor Kasim Reed's 2013 budget proposal

“Atlanta was especially hard hit by the collapse of the housing bubble, and its adverse effects will linger for many years.”

Click here to read a larger version of the chart at right.

The budget includes this statistic: The value of new homes constructed in the city was down more than 75 percent from 2007 through 2011. The figures drop from $290.8 million to $61.6 million, and that’s just for houses and duplexes. Separate values for apartments are not included.

Click here to read the mayor’s proposed budget. See Chapter 2 for the introduction and economic outlook.

This local forecast is in step with the real estate trend that’s being seen on the national level.

On Tuesday, the federal Bureau of Economic Analysis issued a report that included a brightening picture of the overall economy. But with real estate, the optimism ended.

The bureau’s calculation use advance statistic for 2011 to show that real gross domestic product had increased from 2010 to 2011 in 43 states and the District of Columbia.

The good news continued: All eight regions of the country had some level of growth in 2011. That compared to the bad news of 2009, when all regions showed a decline during the depth of the great recession.

However, real estate was a major drag on the economy.

From the bureau’s report:

“Durable–goods manufacturing, professional, scientific, and technical services, and information services were the leading contributors to real U.S. economic growth. U.S. real GDP by state grew 1.5 percent in 2011 after a 3.1 percent increase in 2010.

These figures correlate to the forecast included about Atlanta’s economy in the mayor’s proposed budget.

The chapter entitled “Economic Outlook” in the mayor’s budget document is based on the city’s collaboration with Jeff Humphrey’s, director of the Selig Center for Economic Growth at the Terry College of Business, at the University of Georgia. 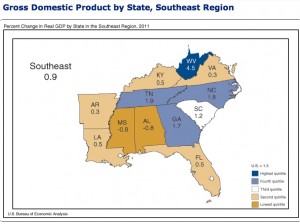 Georgia ranks fourth in the Southeast, which is tied for last place in the nation's GDP growth. Credit: U.S. Bureau of Economic Analysis

The economic outlook reports that Georgia was dependent on real estate development, home construction and related industries such as finance.

Meanwhile, other segments of Georgia’s economy stagnated, the budget reports:

“Not enough of Georgia’s economic growth was based on innovation, educating its own people, courting emerging high‐tech industries, and promoting the growth of in‐state capital markets.”

Another nugget in the national perspective reported by the bureau is regional growth rate.

The Southeast tied for the lowest nation’s growth rate, of 0.9 percent. The other region at this rate is the Mideast – New York, New Jersey, Delaware and Pennsylvania.

Georgia growth rate ranked fourth of the 12 states that comprise the Southeast. Georgia’s rate was 1.7 percent, trailing North Carolina (1.8 percent), Tennessee (1.9 percent) and West Virginia (4.5 percent), according to the report.

Click here to read a larger version of the map, above.