This story has been updated. It reflects a vote Monday by the Atlanta City Council.

The effort to provide more green space in Buckhead received a lift Monday from the Atlanta City Council.

The idea is to establish a linear park in the right-of-way beneath and alongside the actual freeway corridor of Ga. 400, from North Buckhead to near MARTA’s Lindbergh Station. This planned trail is to be linked at some time in the future with other green space that backers hope to assemble with help from a host of public/private partners in Buckhead.

It’s all part of an effort that kicked off in October 2010 to provide more public space in park-starved Buckhead. The Buckhead area has the fewest acres of parkland of the 12 city council districts, according to a recent study. 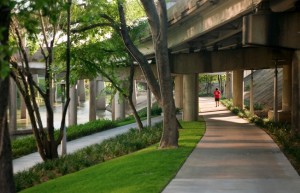 One inspiration for the Ga. 400 linear park is Buffalo Bayou Promenade, in Houston, which is a linear park beneath and alongside highways. Credit: Tom Fox.

The section of right-of-way that’s at issue stretches along Ga. 400 between Loridans Drive, in North Buckhead, and I-85. The land is owned by MARTA and the Georgia Department of Transportation, and both governments have agreed to provide their right-of-way to the Buckhead CID.

Once the land is within the CID’s  boundaries, the CID can oversee its development as a linear park along the guidelines outlined in the Buckhead Greenspace Action Plan, which dates to October 2010.

The project is possible mainly because GDOT acquired more land for Ga. 400 than is necessary to accommodate the highway, once it was built.

Atlanta Councilman Howard Shook, who serves much of Buckhead, is promoting the public/private parks acquisition program as an alternative to the asking the cash-strapped city to acquire parkland in Buckhead. The initial plan envisioned land owners including governmental entities such as schools, and private businesses, and utilities granting public access to their property at mutually acceptable times.

The city has allocated most of its recent greenspace acquisitions money for the purchase of land along the BeltLine.

The Ga. 400 plan has come together under the guidance of Jim Durrett, the executive director of the Buckhead CID. Durrett, a former MARTA board chairman, has a background of overseeing smart growth initiatives in the Atlanta region.

This particular deal is unusual for a community improvement district.

Typically, a CID is expanded to increase its service territory or to increase the amount of money it collects from commercial properties located within its boundaries. The Downtown Atlanta CID, for example, was expanded in the mid 2000s to the south of MARTA’s Five Points Station. The purpose was to provide for increased security and street/sidewalk sweeping in that transitional neighborhood.

This deal with the Ga. 400 corridor involves no money for the CID. The land does not provide any taxes because it is owned by governments.

But in order for the Buckhead CID to develop a linear park along Ga. 400, the governments had to agree for the right-of-way to come under the CID’s umbrella.

In developing a linear park along a highway right-of-way, Buckhead is lifting a page from Houston’s parks program, Durrett has said.

Houston created the Buffalo Bayou Promenade in a park-poor area of that city. The promenade added 23 acres of park land, all of it located next to highways and bridges.

Click here to read more about Buffalo Bayou Promenade and its 2009 Award of Excellence from the American Society of Landscape Architects.

The board that oversees the Buckhead CID voted unanimously on Nov. 21, 2011 to ask the city to expand its boundaries to include the Ga. 400 right-of-way. 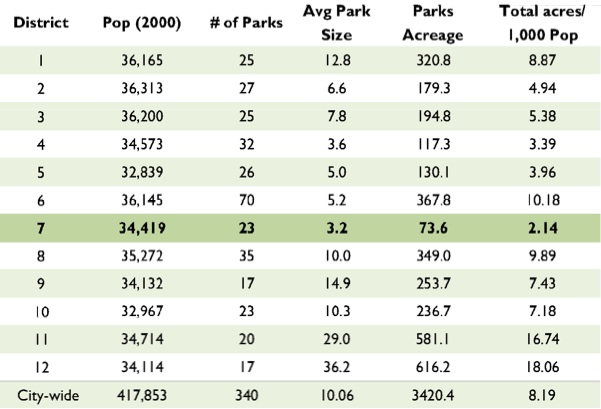