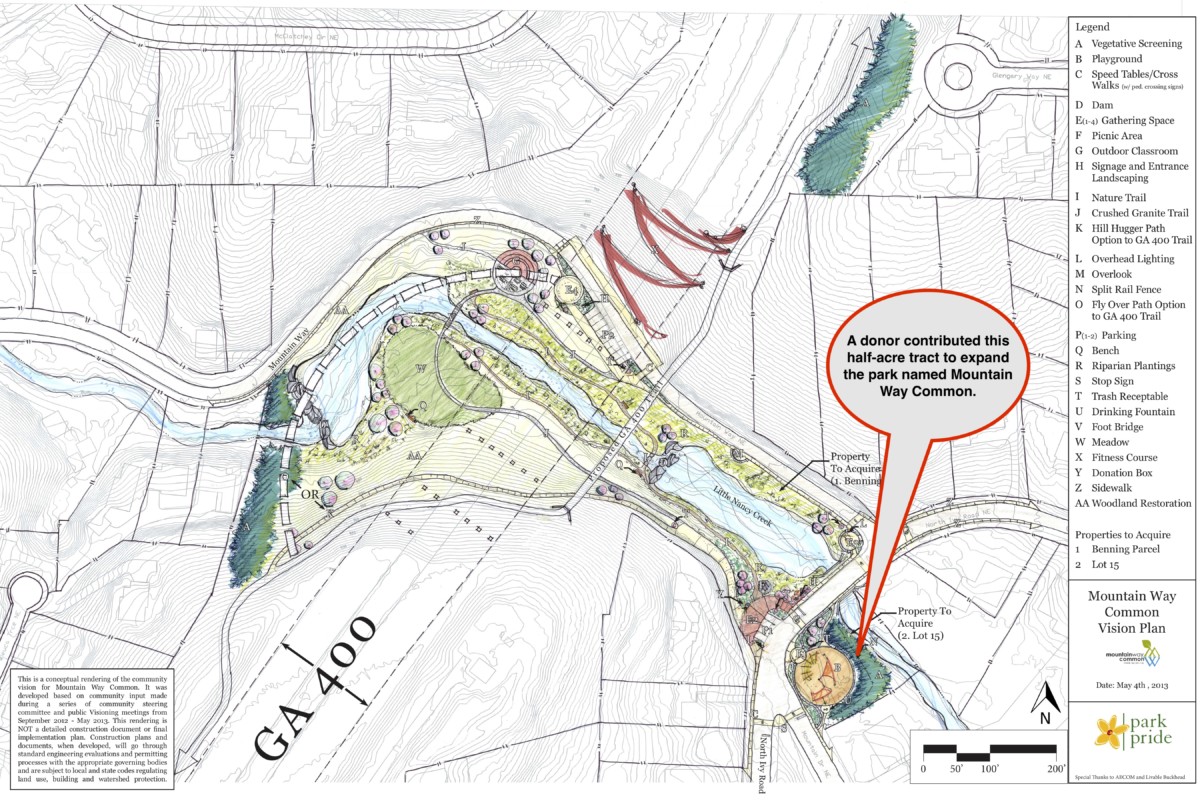 The Mid Broadwell Partnership donated just over a half-acre of land to facilitate the development of Mountain Way Common. The park is to be an entry point to PATH 400. Credit: PATH 400
Share92
Tweet1
Share
Pin
Pocket
WhatsApp
Buffer5
Email
Reddit
98 Shares

A major gateway to PATH400 is to be expanded now that a benefactor has donated a half-acre of land at Mountain Way Park. The park is being developed alongside and beneath Ga. 400, on land that was earmarked as a park on a map that dates to 1938. 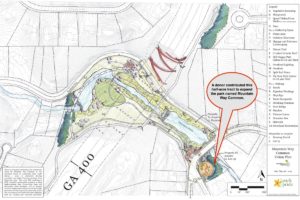 The donated land is located on the east side of North Ivy Road and is adjacent to Nancy Creek. The tract has been fairly isolated since the construction of Ga. 400 in the 1990s, though area residents often traversed it on foot.

Plans for the park call for this portion of Mountain Way Common to be developed as a playground, gathering place for conversing and eating, and is to be equipped with restroom facilities, according to a statement issued by Livable Buckhead, which is developing PATH400.

Advocates of PATH400 have had their eyes on this tract for years. PATH400 is a linear park that is to connect Sandy Springs with a spur of the Atlanta BeltLine, near MARTA’s Lindbergh Center Station.

“The community has wanted to add this land to Mountain Way Common for years,” Denise Starling, executive director of Livable Buckhead, which facilitated the donation, said in a statement.

“Its location across the street from the main gateway makes it a perfect place to add a feature that invites people into the park and raises its overall visibility,” Starling said. “We are really grateful to Mid Broadwell Partnership for this donation.”

According to the statement, the Friends of Mountain Way Common reached out to the property owner several years ago. Dan Weede, the park’s former executive director, contacted Robert Green about the possibility of buying the land in order to expand the park.

Green and other members of Mid Broadwell Partnership, which represents the estate of Jack Bradford and Gordon Mosley, ultimately decided to donate the land. Livable Buckhead facilitated the donation at the end of 2017.

“Dan Weede was the spark for this, and it’s encouraging to see his continuing influence on Mountain Way Common even after he has left his leadership position,” Starling said.

Fulton County tax records value the property at $211,000. But that’s not the full story of its market value.

For starters, the county has valued the vacant tract as high as $336,400. That was in 2009, as the county was at the outset of adjusting values to accommodate for the bottom falling out of property values in the wake of the Great Recession.

Since then, Atlanta’s intown development has surged. The market has returned to the point that developers can make a profit buying a house to acquire the site, demolishing the house and rebuilding one that conforms with modern appetites – at hefty prices.

In addition to these market conditions, the site is now situated along one of the region’s premier emerging linear parks.

The tract is zoned R-3, for a single family detached house, and is platted in a neighborhood named Peachtree Gardens, according to county records.

Previous Article
Downtown became more challenging
Next Article
Shutdown: The fine art of not getting along