Election day was business as usual for some top officials with the state’s Transportation Department. 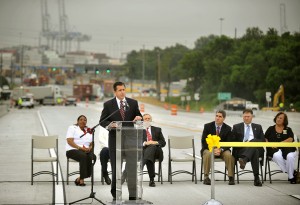 A ribbon cutting ceremony marked the official opening of an improved route for trucks serving the Savannah Port. Curtis Foltz, the port’s executive director, was among those who delivered remarks. Credit: Jill Nagel

They were cutting the ribbon on a new overpass in Savannah while voters were deciding the fate of a proposed sales tax to raise $18 billion for future road and transit projects across the state. Metro Atlanta voters were casting ballots on a $6.14 billion proposal.

The GDOT crowd in Savannah Tuesday morning included Commissioner Keith Golden; board member Jay Shaw, a Lakeland resident who represents the coastal area; and Todd Long, a deputy commissioner who helped craft all 12 project lists that are to be funded with the sales tax proposal on the July 31 ballot.

If there were any mention of the transportation referendum, it didn’t appear in a media advisory about the event issued by the Georgia Ports Authority. Here are some of the comments included in the advisory:

“Providing better mobility for port traffic supports both state and regional transportation needs,” Golden said. “Every dollar we invest in coordinating road and maritime transportation pays dividends in Georgia and the entire Southeast in the form of good jobs and economic growth.” 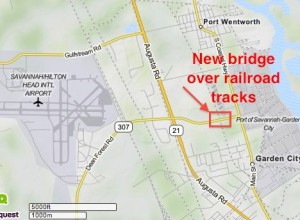 A new bridge at Ga. 307 will ease access to the Savannah port. Credit: Mapquest, David Pendered

“This particular road project provides even stronger freight handling via road and rail to and from the fastest growing region of the United States,” Foltz said. “The Highway 307 improvements work in tandem with other state and GPA projects that seamlessly link two interstate systems, an extensive rail network and the Port of Savannah.

“Enhancing Highway 307 and other transportation infrastructure around the port is a smart investment of state dollars, because the ports and our logistics industry support some 352,000 jobs across Georgia,” Foltz said. “Safely expediting import and export cargo helps to keep those jobs and future investment here at home.”

Ga. 307 is a gateway to the port. It is the site of frequent vehicular congestion as trucks navigate across a junction with railroad tracks.

The new overpass is part of a more comprehensive effort to improve freight access to and from the Savannah port. That work consists of expanding the Jimmy DeLoach Parkway Connector to link the Garden City Terminal with I-95.

The project is slated to be complete in 2015. GDOT has approved the issuance of $121 million in bonds to help pay for the 3.1-mile, four-lane extension, according to the GPA release.

The overpass is to be open for use in August.