Editor’s note: Later data showed Georgia will be able to reduce its planned borrowing by $80 million through an amendment to the transportation plan.

Attention to the calendar will enable Georgia to shift to the federal government about $80 million of the cost of the managed lane project along I-75 south.

Georgia’s Department of Transportation had planned to borrow the $80 million. But the state and ARC were able to able to shift the funding source by tweaking the region’s long and short transportation plans before the state’s fiscal year ends June 30. 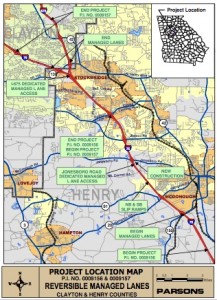 In the scheme of things, $80 million is a small sum. But the endeavor does indicate how far the state will go to stretch its transportation budget. The GRTA board on Wednesday provided the last approval that’s needed.

“This is a good story to tell, of not adding debt to GDOT’s balance sheet, of moving those bonds off to the side,” said Toby Carr, GDOT’s director of planning, who reports to and is appointed by Gov. Nathan Deal.

Carr said the $80 million has not been earmarked for another project and remains available to be used where it’s needed. Proceeds from the motor fuel tax will repay the bonds after they eventually are issued.

The genesis of the cost-shifting effort started a few months ago, Carr said.

“The back story is that this doesn’t happen every day,” Carr said. “This year, in the spring, GDOT determined we have resources through regular program projects to essentially pay cash for this project, which was envisioned to require state bonds.”

What GDOT determined was that the amount of the reserve funds for the project, coupled with some bids coming in lower than expected, resulted in a sum that could be shifted from the state’s bond program to an existing allocation from the Federal Highway Administration. 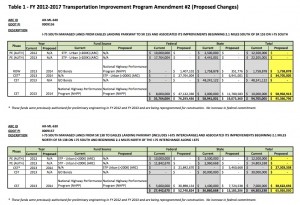 Click on the image to see a larger view.

The federal highway funds had to be allocated before the end of the state’s fiscal year on June 30. Otherwise, the money would have reverted to the FHWA.

In order to allow the money to be juggled within GDOT’s budget, an amendment had to be made to both the Regional Transportation Plan and the associated Transportation Improvement Plan.

These two plans are federally required to comply with the state’s overall plan to improve air quality.

GDOT took its first official step in May to amend the RTP and TIP, by advertising the proposed funding shift in a legal organ.

The first approval came May 22, from the board of directors of the Atlanta Regional Commission. The ARC’s vote was needed because the state has designated it as the entity that sets the transportation agenda for an 18-county area of metro Atlanta.

GRTA’s board of directors provided the final approval that’s needed when it met Wednesday. GRTA represents the state’s seat at the transportation table in metro Atlanta.

The managed lane project consists of a 12.24-mile stretch of I-75 in Henry and Clayton counties. The completion date is December 2016.

“The project is mostly in Henry County, with some in Clayton,” Carr said. “Two reversible lanes. It’s a high priority project for the state and the governor to implement managed lanes.”