The next time wintry weather threatens Georgia’s roads, the state intends to have better equipment and strategies to handle the inevitable traffic problems. 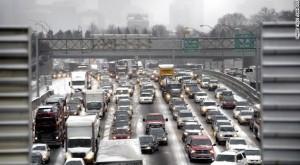 The lack of adequate response to the wintry weather in 2014 prompted state officials to develop a new preparedness plan. Credit: David Tulis/Landov via cnn.com

Admittedly, this report on the state’s weather preparedness seems a little off tempo, given the spring storms this week and sunny forecast for the weekend. But the report is making the rounds, most recently in a presentation to the board of the Atlanta Regional Commission.

Better knowledge and communication comprise the backbone of the response described by Meg Pirkle, director of operations for the Georgia Department of Transportation. Weather stations that monitor the surfaces of roads, and cameras, account for $11.5 million of the $14 million the state Legislature provided this year.

The price of other proposed enhancements was set at $13.4 million. That sum would provide $11.4 million worth of dump trucks and flatbeds, upgrade changeable signs to warn of danger ahead, and sundry other improvements.

Pirkle described a fair amount of gee-whiz technology that Georgia intends to implement: 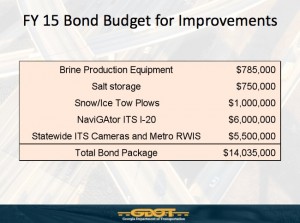 There’s no shortage of traditional responses, which include:

“Could you expand on what steps will be taken to coordinate with local agencies that have major road systems themselves,” Nash said. “There are things we might could do in part of Gwinnett on the state routes.”

Pirkle responded that major improvements in communication have been established, particularly since the storm of 2011. For example, Pirkle said the local governments could get salt from the state to treat state routes. Then she indicated the communication plan hasn’t addressed every situation.

“After the first storm, Atlanta called and asked, ‘Will you treat the ramps, or will we treat the ramps?’ So, I think there’s room for improvement there.”

The weather preparedness program resulted from an executive order signed by Gov. Nathan Deal to respond to the weather crisis . The governor accepted a 37-page report from a task force with 32 members including the governor’s COO, meteorologist Ken Cook, MARTA CEO/GM Keith Parker, and Emily Lembeck, superintendent of the Marietta school system.