‘Gemma Bovery’ – A movie that fails to endear Madame Bovary 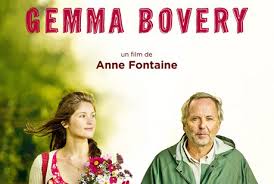 Full Disclosure: I am not a fan of “Madame Bovary.”

But then I wasn’t a fan of “Anna Karenina” until I saw Joe Wright’s dazzling 2012 movie.

I am still not a fan of “Madame Bovary.” If anything, “Gemma Bovery,” Anne Fontaine’s “clever” gloss on Flaubert’s classic, has made me like it even less.

Fontaine is one of a certain group of European female filmmakers who somehow gets away with being even more sexist than their male counterparts (see also, Catherine Breillat and Lina Wertmuller).

“All it takes is one little wave to upset 10 years of sexual tranquility,” says Joubert (Fabrice Luchini), our infinitely unreliable narrator. An otherwise ordinary baker in an ordinary French village, Joubert happens to be obsessed with “Madame Bovary” and its tale of a bourgeois woman undone by an ill-advised affair.

When Gemma Bovery (Gemma Arterton) and her husband Charles (the same name as the husband in Flaubert’s novel) come to town, Joubert is indeed undone. He is convinced a literary masterwork has literally moved in next door. Life must imitate art…mustn’t it?

We have the bored beauty (check). The complacent, often absent husband (check). The newly-arrived young man, available and lusty (check). And then there is Joubert who injects himself in the story as much as he can. Example: Stung by a bee, Gemma implores her neighbor to unbutton her dress and just “suck it.” (the stinger, that is).

If Fontaine had any guts — talent? — she might have pushed her film into full-blown parody. Instead, she prefers to lay back and leer alongside Joubert.

Decked out in a series of flimsy summer dresses, Arterton moves through the movie as if she’s slightly drugged.  As if she existed only to be ogled. Her liveliest moment comes when Joubert teaches her how to knead bread.  She goes at it with much the same lip-smacking wiggle that Marilyn Monroe employed while playing paddle ball in “The Misfits.”

Ultimately, the movie turns out to be nothing more than a clumsy shaggy dog story — a wink and a nudge delivered with all the subtlety of a sledgehammer to the eye.  Maybe Fontaine’s next effort will be “The Great Ratsby.”

That’s pretty much her level.