The corporate headquarters that Cousins Properties is developing for Genuine Parts Co. in Cobb County exemplifies the optimism within the commercial industry that’s cited in the Atlanta Fed’s latest “beige book.”

The architect for Genuine Parts’ new corporate office is HKS, which produced this design for the headquarters of Lear Corp. Credit: hksinc.com

The 150,000 square foot building is a boon to the region’s construction-related industries. Cousins has developed the concept and site solutions. HKS Architects and Hendrick Interior Design is handling the design.

HKS was the architect of record on the LEED Gold Certified Terminus 200 mixed use building that Cousins and JP Morgan developed in Buckhead. In a building closer in size to Genuine Parts’ new headquarters, HKS designed a 125,000 square foot corporate office for Lear Corp.

Genuine Parks new headquarters will be developed adjacent to the company’s Operational Support Facility, located in the Wildwood Office Park two miles from Genuine Parts existing headquarters in Circle 75. Cousins and IBM developed Wildwood in a joint partnership, according to Cousins’ website.

Genuine Parts’ new corporate headquarters is notable because it is an office building at a time apartment construction comprises most development in the commercial sector. 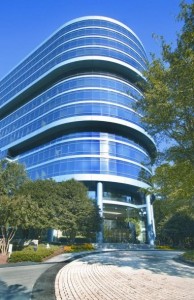 In a break-out section further in the report, the Atlanta Fed provided a more tempered analysis of the commercial construction sector, which has been such a significant component of metro Atlanta’s prosperity:

The big picture of the southeast is generally positive, according to the report:

Previous Article
Stories of Atlanta
Next Article
Tyler Perry-Fort McPherson deal may not be dead, but it is “on the rocks”