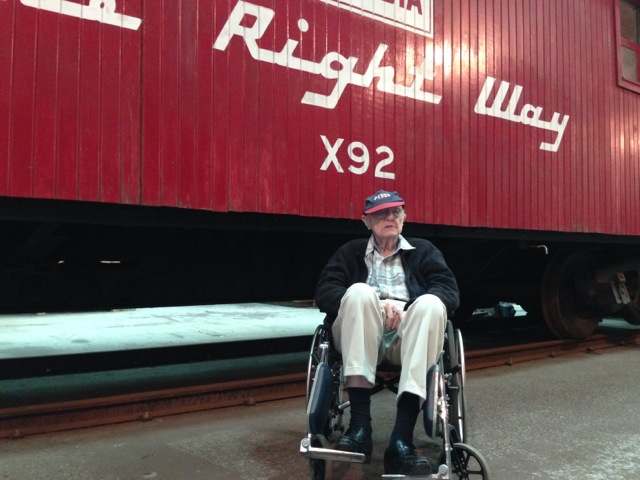 One of the great lessons in George Goodwin’s life of 97 years was – always be open to speaking to anyone you meet.

In Goodwin’s case, that lesson – which he learned at his beloved Washington and Lee University in Lexington, Va. – earned him the first and only Pulitzer Prize (in 1948) that was ever won by the Atlanta Journal. The 1947 series exposed voter fraud in Telfair County where the dead voted in alphabetical order and helped bring Georgia to an historic moment when three politicians claimed to be the state’s governor. 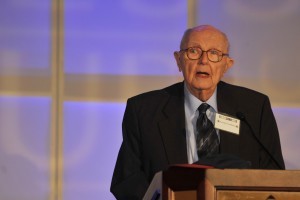 At Goodwin’s memorial service Monday, his son – Clark Goodwin, read a letter dated Aug. 21, 1948 that George Goodwin had written to Francis Gaines, then president of the university. Dr. Gaines had just sent him a letter congratulating him on his Pulitzer Prize.

I deeply appreciate your letter congratulating me on my recent good fortune. It was very thoughtful of you.

You may be interested to know that the Telfair story would not have been possible had it not been for one of the traditions which makes Washington and Lee a great institution. That is the tradition of speaking to people one meets on the street.

My first trip to Telfair County was thoroughly unsuccessful. I found no evidence of the frauds I suspected. As I was about to return to Atlanta, I spoke to an old farmer standing near my car. It was just a casual “Good afternoon, Sir,” but I am certain would not have spoken had it not been for the old W&L tradition.

As I started the engine, he turned and approached me. (Here Clark Goodwin used the words he had heard his father say repeatedly rather than the paraphrased text in the letter. “I know why you are here.”)

Then he volunteered the information I had been seeking in vain for two days. On a later trip to the county, this farmer, who had lived there for more than 70 years, was invaluable in locating some 25 people whose testimony provided the irrefutable evidence of fraud that made the difference between a great story and no story at all.

Somehow it seems only fitting that a part of the Pulitzer Prize money should be forward to the University and reinvested to carry on all the splendid Washington and Lee traditions. So I am enclosing my check.

I want this to go for the Memorial Scholarship in the name of my former roommate, fraternity brother, and dear friend, Walter Guthrie of Washington, D.C. Walter exemplified the best in Washington and Lee traditions. Like many other W&L men, he gave his life in World War II for the high ideals of democracy and the dignity of man that our University stands for. Perhaps this small contribution can help someone like him to carry on where he left off.

With warmest personal regards to you and Mrs. Gaines, I am

Clark Goodwin said that letter showed his father’s “generous spirit” and how he would “pay it forward.” 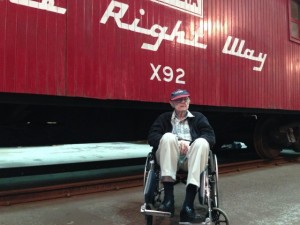 George Goodwin in April 2014 at the Southeastern Railway Museum in Duluth right after his caregiver – Jackee Hooten, and friend, Stacey Hader Epstein had maneuvered him up into a train car for a ride. Notice he’s wearing his trademark Atlanta Press Club baseball cap (Photo by Stacey Hader Epstein)

Allen Goodwin, when speaking of his father at the service, gave a sweeping perspective of his life – saying how he kept in touch with all his World War II navy buddies until they were all gone.

He took language and words seriously, and he did not think out loud – “hence the pregnant pauses,” Allen explained. He had a knack for being in the right place at the right time – the Gone With the Wind premier, the Winecoff fire, Telfair County, helping guide the desegregation of the dining spots at Rich’s as well as nearly every major event in Atlanta’s history from the 1960s through the last decade.

The service took place at Trinity Presbyterian Church on Howell Mill Road, a church that Goodwin had been instrumental in its founding in 1949.

Minister Pam Driesell said that although Goodwin never confirmed this story to her, the word was that he told his wife, Skippy, that he had taken a second mortgage on their house to build the church.

In her tribute to Goodwin, Driesell weaved a “Living Commentary” of his life – saying that his commentary of life was one of love.

Once asked how he knew if his grandchildren loved him, he answered: “They call.” So why do they call? “You have to be genuinely interested in what they are interested in,” he answered.

She also told a story of a gardener who did not want to retire because he enjoyed being around Goodwin so much. Finally, when he could not work any longer, Goodwin told him to retire and that he would continue paying him for another two years.

Driesell shared another story of how Goodwin loved to go by the river with his caregiver – Jackee Hooten. Hooten’s great regret was that they were unable to go to his favorite spot – at the Chattahoochee River and Cobb Parkway at the boat dock – one last time before he passed away. So one of the musical offerings at the service was “Shall We Gather at the River,” a song he loved to sing either on the way there or on the way back.

“George loved life and deeply lived it,” Driesell said. “George was a living commentary on love.”