A scene from "Georgetown"

“Georgetown” is two-thirds – make it three-fourths – of a fascinating movie. Based on Franklin Foer’s 2012 magazine article, “The Worst Marriage in Georgetown” (a better title, I think), Christoph Waltz’s directorial debut is a hearty swing and a near miss.

You know Waltz far better as an actor – probably for his Oscar-winning roles as the nasty Nazi in Quentin Tarantino’s “Inglourious Basterds” and the slave-era con man in Tarantino’s “Django Unchained.” 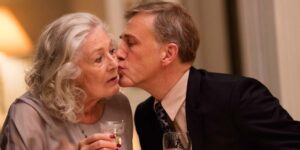 A scene from “Georgetown”

Perhaps Tarantino’s the missing piece in “Georgetown,” because, good as Waltz and his co-stars, Vanessa Redgrave and Annette Bening, are, something is lacking in this generally enjoyable bit of D.C. chicanery.

Waltz plays Ulrich Mott, a confident nobody who somehow insinuates himself into the affections of the much-older Elsa Brecht (Redgrave). A respected Washington journalist and hostess, Elsa is connected to everyone, as we see in the opening scene in which the 91-year-old doyenne presides over a power dinner at their Georgetown home while busy-little-bee Ulrich cooks, serves and co-hosts.

At this point in their marriage, there is no love lost between them. So, when she is found dead the next morning, apparently of a fall, her daughter Amanda (Bening), a law professor at Harvard, smells a rat. A rat who claims he was taking a late-night walk when the accident happened.

The rest of the film switches back and forth between Ulrich and Elsa’s backstory and glimpses of the trial. The device itself isn’t especially confusing, but Waltz and writer David Auburn have botched the narrative. While individual scenes work, it’s often difficult to tell what, exactly, is going on – at least in a cumulative way. 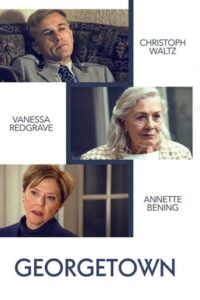 Still, it’s enjoyable to watch Ulrich worm his way into the right circles. And Redgrave brilliantly balances both a lonely woman’s need for companionship (she’s a widow) and her journalistic instinct that her new hubby simply isn’t on the up-and-up. But just how complicit she is in his schemes is never quite clear. Nor is their bond. At some point, all pretense of affection drains away, yet they remain together – even when he disappears from her life entirely for several years (I think it’s several years…).

Actors who want to direct aren’t exactly a dime a dozen, but they are plentiful. And sometimes it works – Clint Eastwood, anybody? But with “Georgetown,” you feel like would-be director Waltz has gotten in the way of brilliant actor Waltz. Mott is a grand role for him – a chance for another take on the patented sleaze he’s played to perfection.

Maybe he should’ve asked Eastwood to direct. Anyone who can talk to an empty chair at a political convention (as Eastwood did in 2012) certainly knows his way around Washington and its byzantine shenanigans.

Note to readers: “Georgetown” is available on video-on-demand. It currently is not showing in metro Atlanta theaters.