Five of Georgia’s S&P 500 companies are among the most transparent in the nation about their political spending. Three companies are in the bottom tier, according to an annual index.

The five companies are in a growing group of “trendsetters” for their disclosure of contributions to candidates, political organizations and trade groups. This year’s list includes 87 trendsetters, up by 15 from last year, including the first automaker to achieve the highest status– Ford Motor Co. 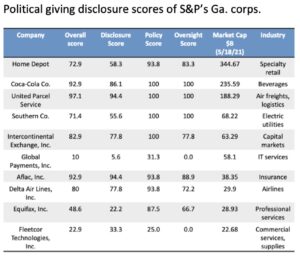 Transparency in political spending informs investors and the public of the degree to which companies fulfill their statements on goals including environment, social and corporate governance, the report observes 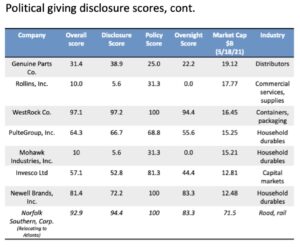 Redistricting is one example of a political exercise that corporations influence through political spending. Corporate words don’t always match deeds.

While espousing support in 2020 for Black Lives Matter, corporate donations flowed to the Republican State Leadership Committee, which seeks to maintain GOP control through methods including the formation of GOP-leaning legislative and congressional districts. Courts have ruled the past formation of some districts by GOP lawmakers has been racially tainted, intended to diminish overall minority voting strength.

Writing in the 2020 CPA report, Rebecca Henderson, of Harvard Business School, noted: “In the current election cycle, public companies – despite their near-unanimous support for Black Lives Matter – have contributed $12.9 million (as of June 30, 2020) to the RSLC, which is seeking to retain GOP control of state legislatures, including those racially gerrymandered a decade ago.”

The “2021 CPA-Zicklin Index of Corporate Political Disclosure and Accountability” observes a trend of increasing transparency in the decade since the index began. The report observes that 195 leading companies have implemented political disclosure and oversight through voluntary programs since the index was established

Writing in the forward, William Laufer, the director of the Zicklin center whose suggestion in 2009 spurred the creation of the index, noted “there is room for some skepticism and cautious optimism” in corporate transparency of political spending.

Causes for skepticism involve fundraising for the 2022 congressional elections “already has topped prior records,” as companies resumed political spending after pausing it following the Jan. 6 attack on the U.S. Capitol.

Causes for cautious optimism include the trend toward transparency, the growing “evidence of greater integration of disclosure and accountability policies throughout the corporate hierarchy, including board involvement, oversight, and review.”

Laufer concludes: “There is a documented history of significant progress toward disclosure and accountability that, over the course of a decade, could not be accomplished with the formalities of laws and regulation. One can only hope that this inspires other transformative reforms to the political process that prize integrity, good governance, and compliance.”

Note to readers: Read the full report to learn more about the criteria used to evaluate corporations and more materials. Click here to visit the Center for Political Accountability to read about political spending by public corporations in the United States. Next week: A look at Georgia public companies that gave to Georgia lawmakers who introduced or advanced restrictions on voting rights.