While cannabis advocates in Georgia didn’t have much to celebrate this year, “marijuana momentum” is spreading across the country, giving prospects for the legalization of the plant the distinct whiff of inevitability.

Last week, on April 20, a small but determined band of activists gathered at the state capitol to rally for reforms that would make cannabis more accessible to Georgians, especially those who need it for medicinal purposes. 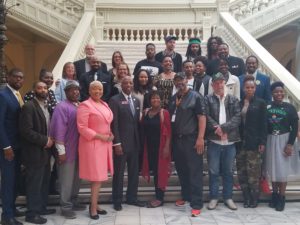 Under current law, non-intoxicating cannabis oil is only available to patients who suffer from one or more severe, chronic or terminal illnesses predetermined by the state. However it’s still illegal to cultivate or sell cannabis in Georgia under any circumstances, making it extremely difficult for medical patients to obtain it without risking jail or hefty fines.

One of the most high-profile and thoughtful local voices in favor of changing Georgia’s cruel and nonsensical cannabis laws belongs to Michael Render, aka “Killer Mike.”  The Atlanta-born rapper/actor and activist made a cameo appearance at the 420 Day gathering to receive an award from the Peachtree Chapter of the National Organization for the Reform of Marijuana Laws (NORML).

It was only fitting that April 20th is also Render’s birthday.

“Marijuana and jazz does what marijuana and hip-hop music does; it brings black and white kids together,” Render said. “This needs to be a poor people’s campaign. This is the new civil rights movement.” 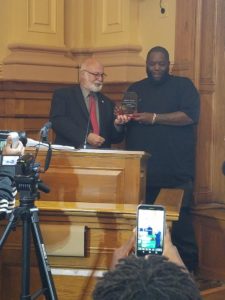 Unfortunately, there are scant signs the movement is gaining much traction in Georgia. Gov. Nathan Deal has been mostly opposed to significant reforms and Rep. Allen Peake (R-Macon), who successfully pushed for the state’s 2015 medical cannabis law, recently decided not to run for re-election. Two of the leading GOP gubernatorial candidates for governor — Lt. Gov. Casey Cagle and Secretary of State Brian Kemp — adamantly oppose cannabis for recreational purposes and have lately made half-baked statements on medicinal use. Republican outsider Clay Tippins, a former Navy Seal, supports medicinal cannabis use only.

Among the two Democrats running for governor, Stacey Abrams and Stacey Evans both support decriminalization measures that would eliminate jail time for simple marijuana possession and replace it with fines akin to traffic tickets. So far, the City of Atlanta and the City of Clarkston have already moved in that direction with other local municipalities likely to follow suit.

Regardless of the outcome of the governor’s race, state Rep. Billy Mitchell (D-Atlanta) and Senator Harold Jones (D-Augusta), who also made an appearance at the 420 Day event at the capitol, have pledged to continuing fighting for bills that will lessen the impact of cannabis penalties, which have a disproportionate impact on the poor and minorities.

Cannabis-related ballot measures are taking shape in Michigan, Missouri and Utah and are expected to go before voters in November. Congressman Earl Blumenauer (D-Oregon) issued an unofficial, “Cannabis State of the Union Address 2018” that envisioned the end of President Richard Nixon’s failed War on Drugs that has turned generations of otherwise law-abiding cannabis consumers into criminals.

Blumenauer is also founder of the bipartisan Congressional Cannabis Caucus which represents the interests of states such as Colorado, Oregon, Washington, Alaska, as well as the District of Columbia, where voters have approved marijuana for adult, recreational use. At last count, 30 states and D.C. have legalized cannabis in some form.

In the name of “state’s rights,” many in Congress are resisting the ministrations of U.S. Attorney General Jeff Sessions by precluding the Justice Department from spending resources  to prosecute legitimate cannabis businesses in places where it’s legal. A March letter to the House Appropriations Committee from Democrat and Republicans lawmakers read:

“We are concerned about the Department of Justice enforcing federal marijuana law in a way that blocks implementation of marijuana reform laws in those states that have passed such reforms. The issue at hand is whether the federal government’s marijuana policy violates the principles of federalism and the Tenth Amendment. Consistent with those principles, we believe that states ought to retain jurisdiction over most criminal justice matters within their borders.”

Also last week, Senate Minority Leader Chuck Schumer said he was introducing a bill to remove cannabis from the Federal Drug Administration’s list of Schedule I Drugs that are defined as having no medicinal value and a high potential for abuse. LSD, heroin and cocaine are on that list but there’s no scientifically valid reason that cannabis should be.

But for me, the best 420 news of so far this year was former House Speaker and erstwhile anti-cannabis crusader John Boehner’s recent announcement that he was joining the board of Acreage Holdings, a company that helps grow marijuana legally in 11 states. Boehner said his views have “evolved” since cannabis helped a friend with his severe back pain. He’s now calling on the FDA to de-schedule the drug to allow for more research, to help veterans with PTSD and other ailments and to reduce the national opioid epidemic.

The man takeaway here? If lifelong politicians such as Boehner can “evolve” on cannabis reform, Georgia’s can too.