The call for police reform following the death of George Floyd and Ahmaud Arbery has been sounded for the session of the state Legislature that is to begin in January. Six such proposals have been submitted in the state House. 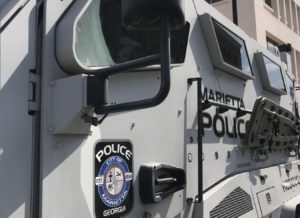 A proposal pending in the state Legislature could ban police departments from receiving this type of vehicle from the federal government. It was displayed by the Marietta Police Department at the Taste of Marietta on April 28, 2019. Credit: Kelly Jordan

The bills address an array of concerns that arose during the discussions last Summer around the issue of police practices and firepower. Floyd died May 25 in custody of Minneapolis police. Arbery was pursued and fatally shot Feb. 23 in Brunswick.

As a group, the bills would stem the flow of military-style weapons from the federal Defense Department to local police entities; rewrite “use of force” provisions around the topic of deadly force; and waive sovereign immunity so that aggrieved persons could file lawsuits against officers, agencies, coroners and medical examiners.

Sovereign immunity is the doctrine that the state, and its representatives, cannot commit a legal wrong and thus cannot be sued in court. 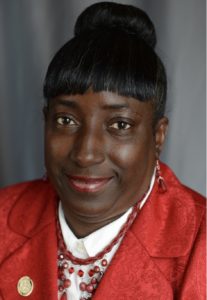 Rep. Sandra Scott (D-Rex) introduced the measures. Scott did not respond to a request for conversation submitted Dec. 3 by phone to a staffer in her House office and by email.

Scott’s ability to propel the legislation is unclear. For starters, Scott’s a Democrat in a Legislature controlled by Republicans. Scott’s influence in the House Democratic Caucus is uncertain; she is not in the leadership circle the caucus elected on Nov. 10.

However, Scott’s raft of legislation does resemble a plank in Joe Biden’s campaign platform of criminal justice reform. The plank, located fourth from the bottom of Biden’s criminal justice platform, cites community oriented policing and says Biden, if elected president, “will establish a panel to scrutinize what equipment is used by law enforcement in our communities.” The promise appears to pick up on a 2014 initiative of the Obama administration.

The six bills Scott introduced and a quick description of each follows: