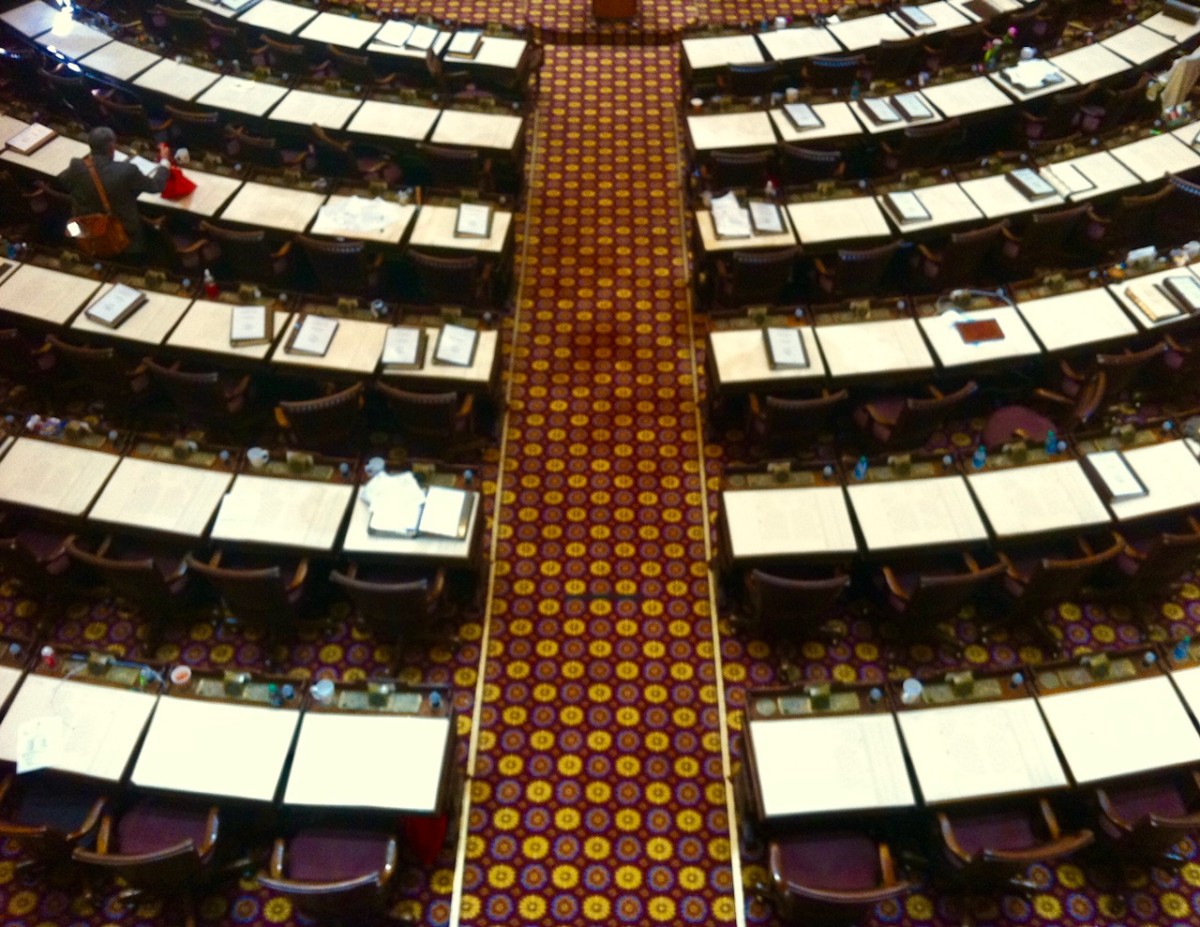 An empty state House chamber. Lawmakers skipped the traditional shredded-bill-confetti-throw because they didn’t want to make a mess for someone else to clean up during COVID-19. File/Credit: Kelly Jordan

The Georgia Legislature sent piles of bills to Gov. Brian Kemp’s desk over this COVID-blighted legislative session that ended Friday, besides the headline items.

Besides the 10-percent-smaller budget and two hate crimes bills (a traditional one plus one that adds penalties for crimes motivated by hatred of police), and some notable unfinished environmental business, lawmakers also approved changes in health care and criminal justice.  Here’s a wrap of some of the big ones that passed or didn’t.  All require the signature of Gov. Brian Kemp to become law.

Georgians who catch COVID-19 at work, at a hospital or at another business probably will only be able to win damages in a lawsuit against the place if they can prove gross negligence, willful and wanton misconduct, reckless infliction of harm, or intentional infliction of harm.

Democrats saw that legal bar as too high.

Ahead of a near party-line House vote, Democrat state Rep. Dewey McClain of Lawrenceville asked his colleagues to vote “no” and said the state had never been closed for for folks like cleaners, chicken plant workers and postal works.

“People need to be able to get back to work,” Kelly said. “And the way you get people back to work, is that the businesses have to feel comfortable opening themselves back up to work.”

An earlier version of the bill championed by state Senate Republicans would have been even broader. This was a “report card” issue for the Georgia Chamber of Commerce: one that the powerful business lobby warned will show up on its grades of legislators, with demerits for voting against it.

But some “surprise” medical bills could soon be a thing of the past. Those are the bills that show up after a patient has unwittingly seen a medical provider that’s not in their insurance network. A typical case is an out-of-network anesthesiologist that works at an in-network hospital.

House Bill 888 is a bit narrow: it applies only to people who buy their own insurance, for example, on the federal marketplace. For them, most “surprise” bills resulting from an emergency room visit would get negotiated between insurer and health care provider, leaving the patient out of it. Most states already have some kind of mechanism to deal with surprise bills, but the Georgia Legislature itself has been caught between feuding insurers and physicians for years. Neither group is looking to give up anything lucrative.

More bad news for state employees. Besides that money for raises has evaporated, so too did a bill that would have given three weeks of paid new-parent leave to some 246,000 state employees, including teachers. House Bill 1094 was a priority for Republican House leadership. And in March, it passed the chamber 164-1. But love in one chamber can easily be disdain in the other. Though Ivanka Trump herself tweeted support, the state Senate threw out the parental leave language and made it a legislative pay cut instead.

And in a micro-Medicaid expansion, the subsidized health insurance will now be available to women up to six months after giving birth.  Right now, Medicaid ends at two months after birth.The cost of House Bill 1114 will be almost $60 million in state and (mostly federal) dollars for the year that begins in July. 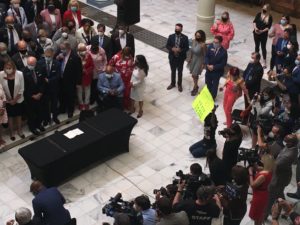 A protestor at a bill signing ceremony on Friday called on Gov. Kemp to veto three bills including Senate Bill 402 and one that extends hate-crime protections to police. Credit: Maggie Lee

Even as COVID-19 makes it more dangerous to crowd people into jails, the Legislature passed a bill that may hinder some judges’ ability to cut people loose on a signature bond — that is, a promise to come back to court later.

Signature bonds were originally meant for low-risk, first-time misdemeanor offenders, said state Rep. Randy Robertson, R-Cataula, sponsor of Senate Bill 402.  But he said judges are letting people out on signature bonds that shouldn’t get out, and his bill bars their use for some serious charges.

Signature bonds are a part of the “end cash bail” movement gaining ground in places like Atlanta. The idea is that it’s unfair for one person to be able to pay their way out of jail while awaiting trial, while another person, accused of the same crime, must sit in jail only because they’re too poor for bail.

The bill’s critics, or those who just think the language might be unclear, are worried. They think appointed judges, that is, many municipal judges, might not be able use what the bill calls “unsecured judicial release” at all; or they might not be able to tack on extra conditions like release into treatment facilities. Critics see the hand of the bail bond industry behind the bill.

Georgians will be able to apply to have more misdemeanor criminal records restricted if they keep a clean record for for years, under Senate Bill 288. Right now, record restriction is mainly available for offenses committed by minors. But the bipartisan bill passed in part on the idea that old misdemeanors are keeping too many people from being able to find jobs.

No dice for casinos, horse wagering or online sports betting this year. Legislation for all three was filed, but nothing gained traction before lawmakers went on a COVID-induced break.  And afterward, not much momentum appeared for it.