The Choptank Oyster Co. farms oysters on the Choptank River, at Cambridge, Md. (Photo from choptanksweets.com.)

DAVIS, N.C. — The establishment of commercial oyster farms such as those that dot the marsh-lined estuaries of Down East North Carolina remains a priority for Georgia scientists, state officials and restaurateurs.

In the Georgia Legislature, the House Rural Development Council has asked the state’s aquaculture officials to deliver recommendations this autumn intended to “increase economic opportunities in the oyster industry.” A Department of Natural Resources official said DNR can meet the deadline. A co-owner of the Kimball House, in Decatur, told the council at a Dec. 8, 2021 meeting that diners want Georgia oysters.

This support, however, is being expressed before the general public has been confronted with the sight of a modern oyster farm. 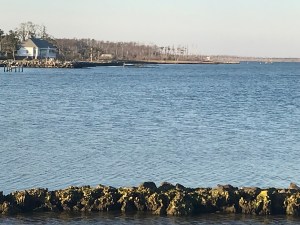 Some commercial oyster operations consist of public waterways covered with PVC frames. These rectangular frames float on top of the water and hold up submerged cages filled with oysters. Hundreds of these frames can be seen floating off sandy beaches in Maryland, places where folks previously may have come to swim or anchor a boat and enjoy a view of a shoreline.

North Carolina environmental officials face opposition from some stakeholders over the use of pubic waterways to grow oysters on a commercial scale. The state is slightly ahead of Georgia in the process of granting leases to oyster farmers for growing oysters in cages suspended in the water column, the span between the bottom and water surface.

The issue in North Carolina involves balancing the competing demands of those who want to grow oysters and those who don’t want their view and use of bays and sounds disrupted by commercial oyster farms.

The headline on a newspaper story about a Feb. 10 public meeting on the regulation of oyster leases states, “Town officials concerned floating aquaculture structures may impair view and water recreation on the coast.” The Feb. 27 story by Mike Shutak in the Carteret County News-Times includes a number of observations similar to one by an elected commissioner of a town on Bogue Banks, who characterized the proposed oyster farms as “a floating junkyard.”

Jacob Boyd uses the word “compatibility” to describe the balancing act. Boyd is based in Morehead City, N.C. and serves as section chief for habitat and enhancement in North Carolina’s Division of Marine Fisheries, in the Department of Environmental Quality.

“We have to make sure aquaculture is compatible with other public trust uses so that it doesn’t overtake the other uses of the resource,” Boyd said.

To that end, a consortium has been created to bring together state officials to discuss best practices in managing the aquaculture arena. The State Marine Aquaculture Coordination Network was formed by the North Carolina Division of Marine Fisheries, in partnership with Florida’s Department of Agriculture and Consumer Services and the National Sea Grant Law Center. NOAA provided funding through its Sea Grant Law program, Boyd said.

The University of Georgia is to host the first meeting, May 17 to May 19, of the “Interstate Technical and Networking Workshop for State Aquaculture Managers and Extension Personnel.” The group is open to aquaculture officials in states from Virginia through Texas. The network was formed in 2020 but has not convened because of the pandemic, Boyd said.

Four goals for the upcoming meeting are: to establish a long-term interstate network of aquaculture professionals; enhance communication among states; secure long-term funding for future recurring annual meetings and expand participating states to a national level.