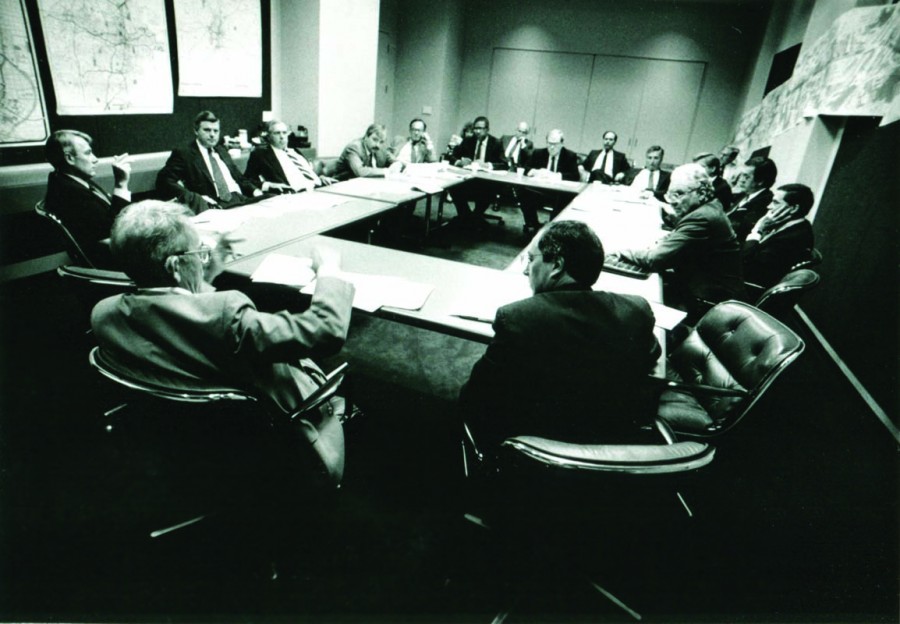 The Georgia Research Alliance was holding its first board meeting with Larry Gellerstedt Jr. chairing the meeting in the “war room” at the former offices of Central Atlanta Progress in the Hurt Building.

An “iconic” photo memorializing that historic first meeting adorned the cover of the workbooks of GRA members attending the board meeting May 21 at the Commerce Club to celebrate the organization’s 25-year anniversary.

People who have been involved with GRA over the decades were invited to the anniversary lunch – giving everyone an opportunity to assess the evolution of the public-private endeavor that has brought $3 billion in research investment to Georgia. 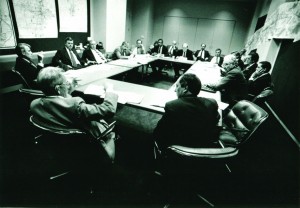 Four people who were in the room on the day of the first board meeting were present at the meeting 25 years later – Chuck Knapp, then president of the University of Georgia; Bill Todd, who was then GRA’s president; Pete McTier, who was president of the Robert W. Woodruff Foundation – which provided the seed funding for GRA; and Amy Todd, who was Bill Todd’s executive assistant (no relation).

“This was a blank piece of paper,” Bill Todd said. “The key strength remains the same. It is the top business leadership that has sustained the organization. GRA’s first logo was a bridge symbolizing a bridge between business, academia and government.”

Knapp put it in context when talking about his predecessor at the University of Georgia – President Fred Davison – and his rival at Georgia Tech – President Joseph Pettit.

“Fred Davison and Joe Pettit would not even be in the same room together,” Knapp told the luncheon crowd. “The rivalry of athletics had led to outright hostility in academics.”

But UGA Alum Tom Cousins, an influential developer; and Larry Gellerstedt Jr., a builder who was quite influential at Georgia Tech, made sure the new presidents of UGA and Georgia Tech would be able to work together. Cousins helped in the selection of Knapp, and Gellerstedt was involved in getting Pat Crecine named as the president of Georgia Tech.

“In 1987, Pat Crecine arrived at Tech, and I arrived at Georgia. I don’t think we hear enough about Pat as we should,” Knapp said. “He was a great partner. We were enabled and pressured by Larry Gellerstedt and Tom Cousins. This nonsense between Tech and Georgia had to end.”

So Knapp and Crecine made a pact. “We were going to try to beat each other’s brains out athletically, but when it came to research, if we went with a unified program, there was a lot to be gained by both institutions,” Knapp said. “Pat and I did 10 joint appearances across the state about the importance of research institutions to the economic development of Georgia.”

People looked at them as if they were creatures from another planet – UGA and Georgia Tech presidents getting along. Just as passionate was Jim Laney, president of Emory University – a private institution that also was one of the six research universities. 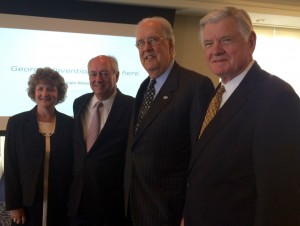 GRA 25 years later – the four people who were at the first board meeting who were at anniversary meeting on May 21 Left to right: Amy Todd, Bill Todd, Chuck Knapp and Pete McTier (Photo: Maria Saporta)

“A lot of what we see today – particularly in terms of the eminent scholars, makes me feel very positive about the trajectory of GRA,” Knapp said. “I think we have live up to the potential, But we still have lots of work to do in Georgia. I don’t want to underestimate the challenges we still face in Georgia. But where would we be without this organization – particularly in the hard sciences and hi tech areas.”

McTier remembered sitting in the room 25 years ago feeling the wisdom of the GRA concept and being “invigorated by the enthusiastic leadership from Larry Gellerstedt and Tom Cousins” – the godfathers of the organization.

“GRA has proven itself over the years because of the way in which business and political leadership have rallied around strengthening Georgia’s research. It is living up to the potential,” McTier said. “It was a marvelous realization of a vision that business and governmental leadership had, and it is one that continues to prosper and one that continues to make a huge difference for our state.”

Amy Todd remembered that McTier had given GRA its first operating money that day – a check for $500,000.

“I walked across the street and deposited it in the Trust Company,” said Amy Todd, who is now GRA’s business manager. “I had never held that much money in my life.”

Then Todd reflected about her decision to leave Emory to go work with this new venture.

“It was pretty risky. I had no idea what it would lead to. But I stepped out on faith that all these influential people knew what they were doing. I wanted to come along for the ride,” she said. “It’s been very rewarding work. I feel I have played a small part of a huge effort. It’s been a privilege to have been part of this team, and that’s why I’ve been here 25 years.”

Knapp, however, cautioned people in the room. The Georgia Research Alliance became a national model because the state had been willing to try a different approach than others were trying – instead of investing in bricks and mortar – invest in the leading scientists, and the rest would follow.

“It was a contrarian decision,” Knapp said. “We have to keep looking around the corner. If all we do is business as usual, then there’s no competitive advantage.”

Note to readers: My colleague, Kathy Brister and I, worked on an archival 20-year history of the Georgia Research Alliance in 2010. It is one of Georgia’s great stories of how visionary business and political leaders brought competiting universities to work together on the state’s behalf.

Previous Article
What can we do to improve our medical system? The $300 billion question.
Next Article
What Brokers and Agents Want From Lenders