The non-profit organization may best be known for its annual Paddle Georgia event, which this year is covering 115 miles from Buford Dam to Franklin. The awards program, now in its 10th year, acknowledges the work it takes to protect the state’s waters and riverbanks.

This year’s awards were won by the Yellow River Water Trail group, in Porterdale; Ogeechee Riverkeeper Emily Markesteyn, in Savannah; and Satilla Riverkeeper Clay Montague, in Waverly. They were presented April 5 at an event at the Chattahoochee Nature Center, in Roswell.

Taken as a collection, the awards recognize efforts to:

Here are highlights of a statement the Georgia River Network released about the award winners:

For their dedication to the Yellow River and for advocating for its health as well as for putting the Yellow River on the map as a recreational destination, YRWT was recognized as Watershed Group of the Year. 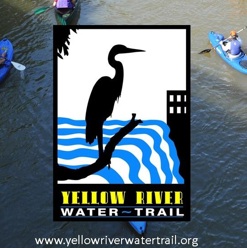 The Yellow River Watershed Trail group was named the 2014 Watershed Group of the Year from the Georgia River Network. Credit: GRN

YRWT leaders Tonya Bechtler and the rest of the board have been instrumental in educating the community about using the river for recreation and enjoyment and ways in which people can get involved in restoration efforts so that it can be considered a healthy place for the communities that rely on it.

A few of their accomplishments include:

For her leadership and tireless dedication to protecting and restoring the Ogeechee River, Emily was recognized as River Conservationist of the Year. 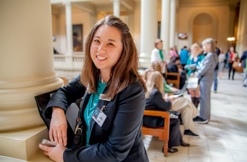 Emily Markesteyn was named 2014 Conservationist of the Year by the Georgia River Network. Credit: GRN

[King America Finishing signed a consent decree with Georgia acknowledging it failed to notify the state of a new flame retardant it was using, and an unauthorized discharge into the river that created a 70-mile kill zone that left 38,000 fish dead. The company agreed to pay $1.3 million for environmental benefits. The state authorized a new discharge permit in November 2013.]

The King America kill has kept ORK busy for years – partly because the communities surrounding the Ogeechee looked to their Riverkeeper to respond where their government did not. Right after the spill, ORK began responding to citizen calls, monitoring the waterways, and making sure other spills, like the King America spill, don’t happen again on the Ogeechee – or in the state of Georgia.

In 2012, Emily became interim riverkeeper and executive director, and has been the sole staff person through the organization’s lawsuit with King Finishing and the settlement this year, which negotiated upgrades to the King Finishing plant, far better discharge permits than were held before the fish kill, and a substantial beefing up of King Finishing monitoring and testing activities. In December of 2013, the ORK board voted Emily in as permanent Ogeechee riverkeeper and executive director of the organization.

In 2013, Emily worked with state Rep. Jon Burns (R-Newington), who introduced House Bill 549, Emergency Response to Pollution Spills, which passed during this year’s legislative session [and awaits action by Gov. Nathan Deal]. This bill will require EPD to maintain an emergency response program and help EPD keep the program staffed and funded. The bill requires appropriate and timely responses to emergencies that threaten the state’s waters and proper public notification, coordination and training between the state and local communities to protect the health of our families during emergencies.

For his hard work, generous spirit and dedication to Georgia’s rivers, Clay Montague was was recognized as Volunteer of the Year. 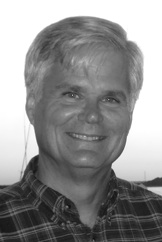 Clay Montague was named the 2014 Volunteer of the Year by the Georgia River Network. Credit: GRN

Clay Montague is an Associate Professor Emeritus specializing in coastal systems ecology in the Center for Wetlands of the Department of Environmental Engineering Sciences at the University of Florida (UF). He retired from UF in 2010 and now lives in coastal Georgia, on the banks of the Satilla River estuary. He has been a volunteer scientific advisor for the Satilla Riverkeeper organization and member of that organization since 2005, and is still acting in that volunteer role today. He has worked professionally over the past 30+ years on environmental aspects of a variety of coastal issues and engineering projects with colleagues at the University of Florida.

In February 2012 he was asked to volunteer as interim Satilla riverkeeper which became a yearlong commitment. During that time, Clay maintained the face of the Satilla Riverkeeper in order to keep donations arriving, learned and executed its business, organized its annual Gala, sought resolutions to unfinished business, wrote new grant proposals, and carried out new grants.

Clay also nominated Noyes Cut in the Satilla River estuary for the Georgia Water Coalition’s 2012 Dirty Dozen Report, which resulted in a joint resolution of the Georgia Legislature to call for the U.S. Army Corps of Engineers to close Noyes Cut. Clay continues his involvement in Noyes Cut and other major issues of importance to the Satilla Riverkeeper, attends board meetings and staff training, travels to field sites, and freely provides advice when requested.