A report released today on Georgia’s tax structure fuels a debate over proposed tax reform that advocates are increasingly pushing for the 2014 session of the state Legislature. 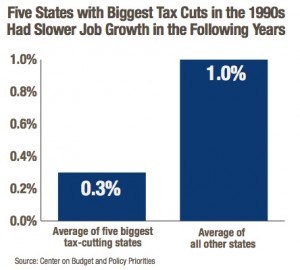 Tax cuts do not lead to job creation, according to the report by GBPI. Credit: GBPI

The Georgia Budget and Policy Institute issued a tax analysis that contends the proposed “Fair Tax” reform would raise taxes on and hurt Georgia’s “families, businesses, communities and the economy.”

The report follows a promise made last month by an advocacy group that said it would help convince Georgia voters to approve a fair tax. The campaign would be similar to the one it waged in favor of 2012 charter school amendment, according to Americans for Prosperity.

“Winning the public over involves a strategy that, I think, would be akin to the strategy that we and other groups that worked on the charter school amendment [used],” said Virginia Galloway, president of Georgia chapter of Americans for Prosperity. “That is, getting out there in front of the people, making sure they understand the facts.”

At issue is the long simmering debate over how to change Georgia’s tax code.

The current debate is framed around the idea of replacing income taxes with a sales tax. The concept goes by various names, including fair tax and flat tax.

The GBPI report appears to push back against the facts as presented by some advocates of a desire to change the state’s tax code. The author said the proposed tax changes have consequences that haven’t been fully discussed and that Georgia lawmakers should not be wooed over by the lastest tax fad.

“In short, we think these tax-shift plans would be negative for families, businesses and the overall Georgia economy,” said Wesley Tharpe, the GBPI who wrote the report. “They would lead to budget cuts in education, degrade the quality of life in Georgia as well as its economic prospects.”

Galloway testified before the committee, as did Kelly McCutchen, president and CEO of Georgia Public Policy Foundation.

McCutchen began his comments by noting that Georgia’s per capita income now ranks 40th in the country, according to a report by the University of New Mexico. Georgia’s ranking has been trending downward since at least 1990, when it ranked 29th. Georgia ranked as high as 24, in 1995.

“This isn’t just a bad headline,” McCutchen said. “This is bad news for our families. … The more we tax savings and work and investment, the less economic opportunity we have for the American Dream.”

Galloway informed the committee that Georgia’s economic competitors are gaining momentum through policies that include changes to their tax code. For example, Galloway said, the North Carolina General Assembly this year replaced “one of the highest” income taxes in the nation with a flat tax.

“They got together this year and pushed it through, using a number of groups including Americans for Properity – North Carolina,” Galloway said.

Tharpe contends the model adopted in North Carolina is not a good one for Georgia to follow.

“The most important thing to do is have Legislature drop it as latest tax fad, and look at more comprehensive review of tax system as a whole,” Tharpe said.