Georgia’s turtles evidently are being caught and shipped to Asia, where they become food or medicine or pets. Now the state is poised to curtail the commercial trade in a product that recently was valued at $65 a pound, for dried turtle parts seized from smugglers in Asia.

The Georgia Department of Natural Resources is about to end the era of limitless collection and sale of freshwater turtles. The rules are intended to regulate only commercial taking of turtles, not turtles gathered for personal use or recreation.

On Jan. 25, the DNR board is slated to adopt the state’s first regulations for the taking and sale of freshwater turtles. That presumes no unforeseen protests are voiced after a public hearing Jan. 5 in Macon.

State Sen. Nan Grogan Orrock (D-Atlanta) was a co-sponsor of the legislation passed in 2010 that ordered DNR to regulating freshwater turtles. Orrock could not be reached for comment. 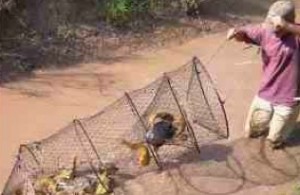 This hoop net is an example of how freshwater turtles are caught in the commercial trade. Credit: Center for Food Safety

Mike Harris is the DNR section chief who has worked on the proposed set of rules, which he presented last week to the DNR board. The proposals are the result of a collaborative process with various stakeholders, including the few commercial freshwater turtle farms in the state.

“Globalization has resulted in export to the Far East for food and pets,” Harris said to the DNR board. “The turtles’ low reproductive rates prompted us to seek regulations so they don’t become depleted.”

Harris elaborated on the state’s plan in a conversation Monday.

“This was identified in 2005 in our state wildlife action plan as something we needed to look into,” Harris said. “There was a growing concern among wildlife agencies all around the country over the past 10 years as the international trade in freshwater turtles flourished.”

Meanwhile, in 2008, the advocacy group Center for Food Safety called on Georgia to issue an emergency order barring the harvest of all freshwater turtles. Here’s how the group framed the issue:

“Georgia law currently allows an unlimited number of freshwater turtles to be harvested from the wild and sold as food. Under this regime, every non-protected freshwater turtle that exists in Georgia can be legally collected and sold.

The health risk is comparable to that posed by fish: Both creatures tend to accumulate toxins they ingest or absorb.

Harris said all indications are that most freshwater turtles harvested in Georgia are sold live. No one knows the number that may be gathered and sold for commercial purposes, he said. But that figure is among the information the new rules intend to gather about the turtle trade.

On the national level, no one knows exactly how many freshwater turtles are exported from the U.S. to Asia. A 1999 study estimated that thousands of tons a year of live turtles leave the U.S bound for China, according to 2008 report by the Center for Food Safety. In June, authorities in Bangladesh seized more than 250 pounds of dried turtle from smugglers, and the BBC said its street value was almost $65 a pound.

If the turtle taking rules are approved, Georgia would join Florida and South Carolina in regulating the commercial turtle trade. Again, the state doesn’t intend to prevent anyone from picking up a turtle in a creek and taking it home as a pet or food.

“Our intent is not to regulate people who take turtles for recreational use or local consumption,” Harris said. “No permit would be requiring for taking up to 10 turtles a day. For larger numbers, there would be some limits and they would range from 100 to 1,000 turtles a year, depending on the species.”

Previous Article
You are invited to watch our 1-Minute Video: “Moments” on SaportaReport
Next Article
Column: Civil Rights Center will be built in phases