GeorgiaForward making strides to unify the state with a common vision

Consider all the many ways Georgia can be carved up.

We have got metro Atlanta, 13 other significant metro areas and the rural parts of the state.

We have the two Georgias — metro Atlanta and the rest of the state.

But it takes a special skill to figure how we can be one Georgia.

That was just what Georgia Forward, an organization of civic, government, business, academic and non-profit leaders, tried to visualize at its third annual conference this week in Athens, Ga. 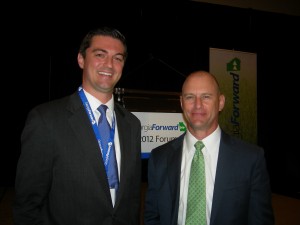 Here is the thesis. As long as we are a divided state with multiple and contradictory visions for Georgia we will never reach our potential.

So how can Georgia build consensus towards a cohesive and inspirational vision for our state? Georgia Forward added another twist this year. How can Georgia in 20 years become a national model for prosperity in every corner of the state?

GeorgiaForward made a valiant attempt to answer those questions over two days of meetings where several issues critical to our prosperity were explored — health, transportation, rural development, thriving cities as well as hunger and poverty.

About 240 leaders attended the two-day forum from Sept. 12 to 13 — sharing their thoughts of how Georgia can become a more unified state. 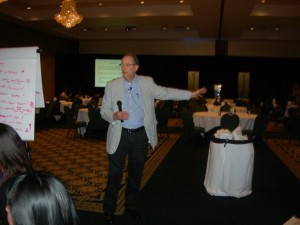 At the end of the conference, attendees were asked what should be the state’s priorities.

Of 16 different choices, participants settled on six issues that should take priority. In descending order, they were:

2. 2. Find ways of connecting all parts of Georgia to broadband through incentives to until the gap is closed for all Georgians;

3. Create a statewide “quality communities” initiative based on a quality of life vision by creating partnerships with government, businesses and nonprofits; 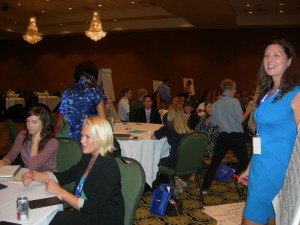 4. Create a strategy and set of programs for retaining our graduates through tax credits, incentives and a welcoming culture;

5. Create a “collaboration pyramid” in Georgia where grassroots conversations between business, community and local government leaders drive the vision among the different regions throughout Georgia and at the state level; and

6. Create a statewide Pre-school to college education initiative by providing access to high-quality early education and creating a higher education curriculum that is aligned with business needs.

The group also worked on a “vision statement” for the whole state (see draft document below with additional notes based on breakout discussions).

Given the time and energy leaders were willing to spend at the GeorgiaForward forum, it is clear there is a hunger to build bridges between various parts of the state for the greater good.

Inevitably, the forum invites comparisons to North Carolina, which has had a similar statewide envisioning process for decades. Not coincidentally, today North Carolina is enjoying the enviable reputation as being perhaps the most successful state in the Southeast if not the nation — a position Georgia used to enjoy. 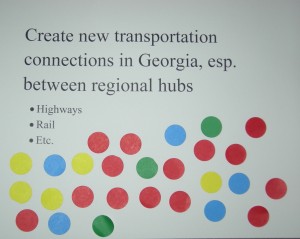 GeorgiaForward emerged out of a concern that because of a fractured relationship between different parts of the state, Georgia’s economic vitality was slipping backwards as other competing states were stepping into the spotlight.

“The idea of GeorgiaForward came out of a series of meetings five years ago,” said A.J. Robinson, chair of the GeorgiaForward board who also is president of Central Atlanta Progress. “Everybody felt we could do a better job in our state building a common vision for all.”

Although there has been widespread grassroots support for GeorgiaForward, it has not yet attracted the kind of financial support it needs to continue its valuable work.

It would seem that all sorts of people, companies, philanthropies and institutions should be supporting an effort that could be key to our state’s economic future and our ability to meld the great divide between all the various Georgias that have held us back.

Certainly it’s worth all of us doing what we can to propel GeorgiaForward.

A Vision for Statewide Prosperity

In 2032, Georgia is the only state that has found a way to create prosperity that is “deep and wide” – that is anchored in industries and jobs that will grow in the future and is spread across the state.

At the core of this transformation are some changes that have come to the state:

Collaboration: Georgia has developed unparalleled cooperation, among local governments, regional planning agencies, economic development organizations, universities and within state government. Leaders across Georgia know how the other regions are doing and are committed to helping one another prosper.

Connectivity: Georgia has become the most interconnected state in the country in terms of travel and communication. It is easy to get from one part of the state to the other, by road, air and rail. And Georgia has become a leader in Internet access. As a result, statewide meetings are held on the Internet routinely, which reinforces the collaboration that the state has become known for.

A shared vision with many parts: Because of the state’s connectivity and collaboration, Georgia’s leaders have found it easier and easier to agree on important economic development strategies. That doesn’t mean that every part of Georgia produces the same things, but rather that their economies are increasingly complementary. When the state starts an economic development initiative, the 14 metro areas and the smaller communities quickly find parts of the strategy that they do best.

In addition to these changes, Georgia has made breakthroughs in two areas important to a quality work force:

· It has solved the health care access problem. Every part of the state has quality health care and increasingly healthy lifestyles, thanks to better education and nutrition.

· It has solved the education access problem. Metro Atlanta has long been a center of higher education excellence. Now Georgia has found way of making those assets available to citizens across the state, along with dramatic improvements to K-12 and technical education.

Finally, there has been an awakening in Georgia’s communities. They have accepted the need for a high quality of life as the best way of keeping talented young people. From access to arts and recreation to a growing appreciation of local history and institutions, communities are finding ways of making themselves more distinctive and appealing.

Because it has done these things, per capita income is rising fast in Georgia, it has one of the lowest unemployment rates in the country, its education and health care outcomes are improving rapidly, and every part of the state shares in the prosperity.

Notes: In their editing of the vision draft, the small groups made many suggestions for word changes and reorganization. For instance, they suggested changing the verb tenses in various places, tightening the language, and moving paragraphs from one section to another.

There were also suggestions for names of issues and opportunities. One group was cautious, for instance, about the term “shared vision” because its members felt it was too “utopian;” they suggested using the word “consensus” instead. Another group felt that dividing education between K-12 and higher education missed an opportunity to see education as a larger system. It suggested calling it “P-21,” which would include education from pre-school through college.

There were also new ideas that might be worth considering as future revisions are made. They include:

· In addition to overcoming the health care access and education access problems, Georgia should become a leader in overcoming diversity issues.

· Another major obstacle to be considered in statewide prosperity efforts is water.

· The word “sustainability” or “sustainable” should be part of any vision for statewide prosperity.

· The paragraph about quality of life should include a clearer statement of the importance of arts and culture.

Previous Article
Imbroglio in Buckhead: Fate of proposed Walmart, 600 jobs, about 250 apartments on the block Monday
Next Article
Why the Housing Recovery Matters