The owners of the Georgian Terrace are taking steps to sell the development rights associated with the building to another property in Midtown. 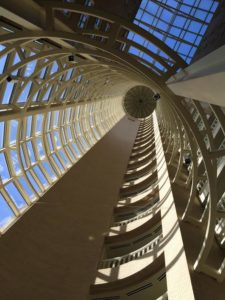 The owners of the Georgian Terrace are taking steps toward selling development rights to another property in Midtown. Credit: Kelly Jordan

Atlanta’s Urban Design Commission is slated to consider the proposal this afternoon and provide comments. The Atlanta City Council is expected to consider, in late May or early June, the special use permit that’s related to the transfer.

No buyer is waiting to purchase the proposed transfer of development rights from the Georgian Terrace, Sharon Gay, a lawyer handling the transaction, said Wednesday. The action simply positions the building to have an additional value that can be realized at some point in the future.

The practice of transferring development rights allows property owners to buy and sell the zoning rights to develop certain densities. In communities outside Georgia, the TDRs sometimes are known as air rights – meaning the right to build densely developed projects.

“It’s a very elegant solution,” Gay said of the concept behind the TDRs. “It’s a great idea for the protection of historic properties, in that you can sell the development rights for real money … and protect that property from future development.”

In the case of the Georgian Terrace, located across from the Fox Theatre at 659 Peachtree Street, the property could be developed to a greater degree than owners now envision. By arranging a potential transfer of development rights, those unused development rights can be sold to another property that does not have a zoning classification adequate to build a density that the owner desires.

The Georgian Terrace was completed in 1911 in the Beaux-Arts style at a time luxury hotels were being built in several cities across the South, according to the New Georgia Encyclopedia. A 19-story wing was added in 1991 when the owner turned the property into a luxury apartment building.

Because the Georgian Terrace is located in the Midtown special public interest zoning district, the building’s development rights can be sold only to another property in the Midtown SPI, Gay said.

The TDR concept has been used in Atlanta, but not frequently. Other properties that have severed a portion of their development rights include the Castle, the Academy of Medicine, the Peters House, and the Margaret Mitchell House, according to Atlanta’s 2011 Comprehensive Development Plan.