Georgia’s economy growing, but barely, according to Gov. Deal’s budget proposal for FY 2015

If any proof is needed that Georgia’s economy hasn’t turned the corner, it’s evident in Gov. Nathan Deal’s proposed budget for fiscal year 2015, which begins July 1. 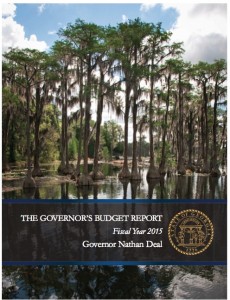 The cover of Gov. Deal’s proposed FY 2015 budget is a photograph taken by Georgia artist Myrtie Cope, “Banks Lake National Wildlife Refuge.” It was chosen to hang in the governor’s office as part of the rotating exhibit managed by Georgia Council for the Arts. Credit: Office of Planning and Budget

Deal predicts the state’s revenue will grow by 2.9 percent in FY 2015, compared to the rate of almost 3.6 percent Deal forecast for FY 2014, according to an analysis of figures in Deal’s budget proposal.

In addition, Deal’s FY 2015 budget proposal would borrow just 7 percent more money than proposed in last year’s budget. Still, even with the increase, the amount is 16 percent less than the sum that was proposed in the FY 2007 budget. The amount of new debt proposed by any governor is a proxy for the evaluation of Georgia’s long-term economic prospects.

Deal has proposed to borrow a total of $763.1 million in FY 2015. Annual debt payments of $84.3 million would retire bonds with terms ranging from five years to 20 years. Here are some of the notable proposed expenses:

In the big picture, Deal has maintained Georgia’s tradition of conservative budgets. This practice has benefited Georgians in the form of favorable interest rates affixed to Georgia’s bonds. Georgia has top marks from the three major bond rating agencies.

One of the governor’s primary tools in determining the state’s spending plan is through the sole authority to set the figure of expected revenue. Lawmakers can make numerous changes in the way the state spends money, but are not allowed to alter the governor’s revenue estimate.

As Deal noted in his transmittal letter that accompanied the budget proposal, his projected growth rate for the current year proved to be low.

Deal expects the state to end FY 2014 with a surplus and has earmarked more than $339 million to the rainy day fund. The account now has a balance of $717 million, which is an increase of more than 500 percent in the three years since Deal took office, according to the transmittal letter.

If a surplus exists at this time next year, it will be up to the next governor to recommend how to spend it. Deal is up for reelection in November.

Jobs are one of the clouds hanging over the state’s economy and impacting the budget proposal. The jobs picture remains troubled, according to the budget. Jobs – and the personal income they create – have been slow to return after the recession officially ended, according to the “Georgia Economic Report” contained in the governor’s budget proposal: